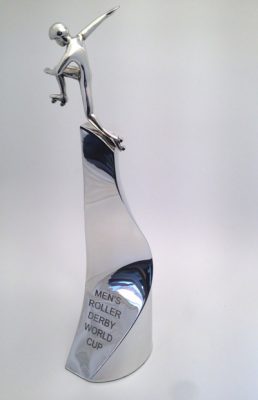 Working closely with Digbeth based A E Williams who are the oldest pewter casting company in the UK, this strong Brummie team have produced sporting silverware to be proud of.

The trophy, called ‘The Spirit of Derby’ is to be awarded at the inaugural Men’s Roller Derby World Cup which took place mid March at Futsal Arena, just a stone’s throw away from the couple’s studio.

Birmingham was lucky to be hosting such an exciting event; Roller derby is the fastest growing sport in the UK with over 3000 regular skaters. Although this was the first Men’s World tournament, the first Women’s World Cup took place in Toronto, Canada, in 2012.

Birmingham’s Steve ‘Rex Tangle’ Varndell, coach of the Birmingham Blitz Dames Roller Derby Team, is modelled doing an ‘apex leap’ for the skater form featured on top of the trophy, no mean feat in Roller Derby. Now this little pewter skater has been christened ‘Apex Rex’ or King of the Apex’.

Rex himself also plays roller derby alongside both Magnus and Bella who play for local teams, Birmingham Blitz Dames and the Crash Test Brummies.