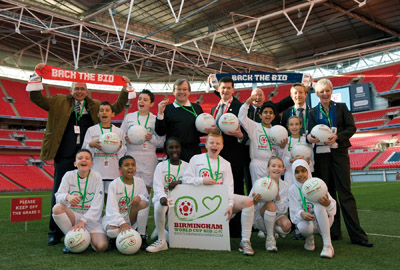 Simon Topman, Managing Director of Acme Whistles was present at the handover of Birmingham’s Bid to be a host city for the World Cup 2018 by the official delegation to the FA at Wembley Stadium.

Acme Whistles produced the original Acme Thunderer whistles used by the referees at the World Cup 1966 matches in England and Simon Topman took one of these to Wembley Stadium yesterday.

To mark the 2018 Bid, Acme Whistles have also made commemorative versions of the Acme Thunderer whistle with the Back the Birmingham logo as part of the official handover to the FA .

The football team sized delegation of local children, sporting ‘Back the Birmingham Bid’ kit and England 2018 scarves, travelled to Wembley by coach at 6.00am (for a 9.15am handover) together with other members of the city’s official delegation including representatives from Birmingham City Council, Marketing Birmingham, NEC and the city’s football clubs.

Simon Topman kept his team in order using one of the original whistles from the England 1966 World Cup, commemorative copies of which have been made with Birmingham’s 2018 branding and have been presented to the FA together with the city’s bid documents.

Simon Topman said: “We’ve been making Acme Whistles in Birmingham since the 1860s and they are used by referees all over the world. Indeed Birmingham has an amazing sporting and manufacturing heritage and is famous for making football medals, badges and cups including the FA Cup. It’s a great honour for me to be asked to represent the city’s business community as part of the official Bid delegation.”

Two of the children from Hodge Hill Sports College, Sam Fallon and Awa Bittaye, were given a celebrity send off on Tuesday in Birmingham by avid football fan Jasper Carrott and adopted Brummie and football legend Cyrille Regis, who were on hand when council leader Mike Whitby handed the official documents to the children for delivery to Wembley.

Cllr Mike Whitby said “The children from Hodge Hill Sports College are the perfect ambassadors for Birmingham. Birmingham’s passion for sport goes across all ages and cultures from school playing fields to amateur clubs and professional stadia. These youngsters represent the future of football in the city and we hope that they will remember this moment for the rest of their lives.” 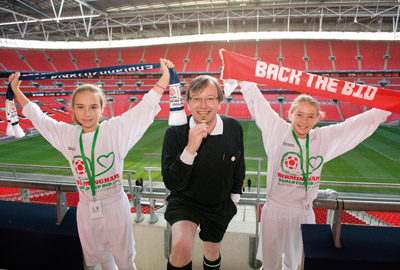 Legendary football player, Cyrille Regis, whose career has included several Midlands clubs including Coventry City and West Bromwich Albion said, “Staging a world cup in Birmingham will leave a fantastic legacy for future generations” and comedian Jasper Carrott, a lifelong Blues fan and passionate supporter of Birmingham’s bid said: “It goes without saying that Birmingham, as centre of the universe, should be chosen by the FA to be a host city.”

Birmingham has been working on its application to the FA for the last five months putting together a comprehensive proposal that outlines its facilities and plans, its sporting heritage and its passion for football. Its bid is built on a strong partnership with Aston Villa FC, using Villa Park as the stadium venue and the city’s other Football Clubs – Blues and West Bromwich Albion – providing training grounds and camps.

There would also be four team base camps in the region where National teams would stay for the duration of the tournament. The NEC would become the site of a National Fan Park and there would be another Local Fan Park at Cannon Hill Park. The city’s iconic buildings and venues would also be used for other major elements of the competition such as the official Tournament Draw and there would be a host of ‘live’ sites from to watch matches, whilst the city would be festooned with banners, flags and posters to welcome the national teams and visitors.

Cllr Mike Whitby added: “Birmingham is an ideal host city. We’ve got everything, the transport infrastructure, the facilities, the expertise and of course a huge passion for sport. Such is our cultural diversity that we can guarantee a warm welcome for any teams based in Birmingham and, very likely, a home crowd for every game. Hosting the World Cup would be a tremendous achievement for the city, enabling us to showcase our ability to stage international sporting events on a grand scale and involving everyone in the community in some way. We are grateful for all of the support we have received from stakeholders, businesses and the public and hope that the FA’s decision will acknowledge Birmingham’s passion for staging World Cup football.”

With public support for the Bid counting as one of the factors that the FA considers when deciding on applicant cities will go forward, Birmingham has generated a far-reaching hearts and minds campaign that has involved celebrities, professional and amateur football players and footie fans from all over the region.

Traditional and digital elements of the campaign encouraged people to vote for the city through the official England website and helped to build a 2000 strong Facebook group and hundreds of people uploading kicks in support of the campaign at the official website www.backthebirminghambid.com

The FA will announce which 11 English cities will go forward as part of the official England 2018 bid by 16th December 2009. England’s Bid to FIFA will then be submitted by May 2010 and after the World Cup in South Africa, FIFA will announce the 2018 Host Nation by December 2010.