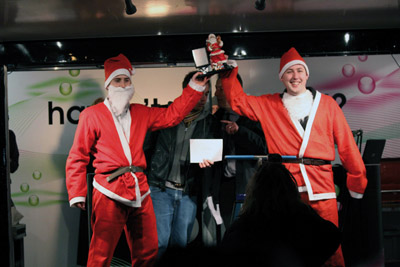 Christmas was heralded for the third year running by our charity three-legged Santa Race with the winners becoming instant B list celebrities by switching on the Christmas lights.

This year, thanks to the efforts of the Jewellery Quarter Marketing Initiative, BRMB were on hand with their stage to mastermind the proceedings.

This year’s Santa race was in aid of the Children’s Hospital and was won by Cirrus Diamonds. This was despite a late ‘FIFA’ style objection (from a source who wants to remain anonymous) who suggested that Cirrus were involved in some sort of sharp practice.

However it seems that, at all times, the duo of Santas from Cirrus kept their legs straight and were worthy winners. 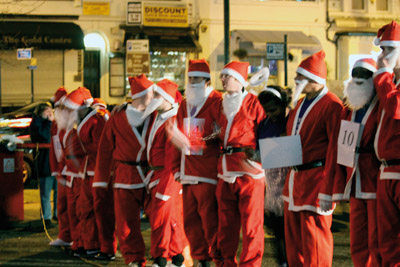 This year, there was also a sprinkling of angels although these were fairly thin on the ground and somebody was heard to remark (perhaps unfairly) that this was no surprise as there were few angels in the Quarter anyway!

Overall almost £800 was raised which represents a fantastic effort in these hard times and a particular mention should be made to Toye, Kenning and Spencer who raised over £200 of that figure.

Additionally, thanks must go to Eaglesfield who, yet again, provided the trophy, Graham Smith from the Red Lion, Warstone Lane who donated a meal for two and also for all those who entered or turned up to watch on a typically bitterly cold day.

The teams who took part in the race were: –

The Christmas lights also look a picture and a big thank you goes to those who have supported them including the Jewellery Quarter Marketing Initiative. A full list of sponsors will appear in the next edition of The Hockley Flyer.

By the time this edition of the Hockley Flyer has been published, we should have held our Christmas Shopping Day on December 12th and if you have been listening to BRMB you will have heard the Jewellery Quarter shopping campaign and, again, a list of supporting shops will appear in the next edition of the Flyer.