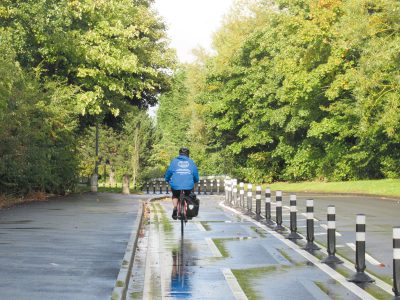 Birmingham City Council has been awarded circa £4.5m as part of the second tranche of funding from the Department for Transport’s Active Travel Fund; part of a £13m allocation to the West Midlands Combined Authority.

An engagement programme with residents and businesses on how they would like to see the funding used in their communities is already underway.
Cllr Waseem Zaffar MBE, Cabinet Member for Transport and Environment at Birmingham City Council, said: “This second tranche of funding gives Birmingham a real opportunity to continue transforming our transport network, reduce air pollution, and provide our citizens with more opportunities for active travel. In the second half of 2020 we delivered a wide range of emergency transport measures to support walking, cycling, public transport and social distancing across the city.

“Working closely with our communities and key stakeholders, we will start to transition from a focus on the Emergency Transport Plan to the longer-term picture and progression of the Birmingham Transport Plan. We want to focus on supporting a green recovery and will seek community input at every stage, with future schemes being delivered throughout 2021.”

The Active Travel Fund supports the improvement of active travel (cycling and walking) provision and safety in towns and cities. Birmingham City Council recently completed an official review of the Emergency Active Travel measures that were delivered in 2020, with a report to be published shortly. The findings will help guide how some of the existing schemes will be developed, expanded on and/or, where appropriate, made more permanent.

The funding will also support some new active travel schemes, focussed on supporting a green, low carbon recovery (rather than being part of the emergency response). This will include pop-up cycle lanes, walking improvements in local centres, and further development of Places for People and the City Centre Segments scheme.

The initial proposals will be developed through community engagement and delivered in the coming year. Local residents have been invited to have their say via Commonplace: https://covidmeasuresbirmingham.commonplace.is/
Formal consultation on the proposals will take place later this year after lockdown restrictions have eased to ensure inclusive, meaningful engagement with communities and key stakeholders can be carried out.

The plans support the Council’s vision for a cleaner, greener city – as set-out in its Route to Zero Action Plan, which was approved last month.

The benefits of Active Travel:
Even when there is a lot of traffic, the evidence suggests that those cycling and walking often experience lower exposure to air pollution than those driving. There is a common misconception that the air outside a car on a busy road is more polluted than inside. Studies show that drivers and passengers inside vehicles are often exposed to significantly higher levels of air pollution than those walking or cycling along the same urban routes. This is because cars can suck in emissions from surrounding vehicles, particularly those that are immediately ahead, and recirculate them within a confined space.

Cycling and walking also creates less pollution and there are well understood health co-benefits from active travel, including greater fitness and improved mental health, as well as lower risk of obesity, heart disease and lung disease. In addition, active travel reduces traffic congestion, itself a major cause of air pollution.

Taking the scenic route and walking along quieter roads reduces exposure even further. Fewer cars on the road means less pollution for everyone.