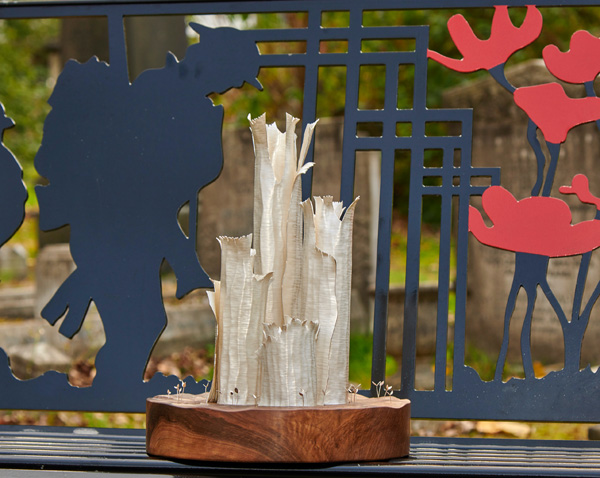 Last year the BATF board decided to commission a special piece to join its boardroom silver collection of over 50 items and tasked one of its member associations, The National Association of Jewellers, to help find a fitting item.

A national competition was held to design and make a piece of silverware to commemorate the end of the First World War, taking that ceasefire as inspiration.

At the beginning of the year Claire Malet was announced as the designer silversmith winner and now she presents her piece to Kate Owen BATF Director and Gary Wroe BATF President and MD of Birmingham manufacturing company Hockley Mint.

Since then Claire Malet metal artist and silversmith has been working on her winning piece, ‘Silence Fell’ inspired by the desolate war landscapes painted by Paul Nash during the First World War. 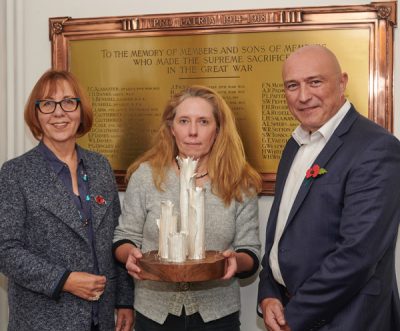 It features four hollow tree forms in Britannia silver, one of each year of the war with silver ‘seedlings’ surrounding the trees symbolizing the tentative hope for a peaceful future, after such overwhelming suffering and loss. The trees have been placed on a subtly carved walnut base turned by Nick Barberton.

“They have been over 40 hours in the making with the textured and chased silver sheets being bent into hollow tree forms – adding the sterling silver seedlings have brought the piece to life,” Commented Claire.

It was hallmarked at Birmingham Assay Office and delivered to the BATF to be displayed alongside other award-winning silverware.

BATF:
The British Allied Trades Federation (BATF) is a trade association with over 3000 members across the jewellery, giftware, surface engineering, travelgoods and accessories industries. The BATF have been supporting these industries since 1887 in a rapidly changing environment. www.batf.uk.com

NAJ:
The NAJ is a professional membership body representing 2,000 members that operate in every aspect of the jewellery industry. As an industry-leading education provider, they deliver internationally recognised qualifications, exciting short courses and bespoke business mentoring.

The Association was formed in 2015 through the unification of the British Jewellers’ Association (BJA) and National Association of Goldsmiths (NAG).

The Institute of Registered Valuers is also part of the NAJ family, comprised of around 150 professional valuers with formal qualifications and substantial experience. Every NAJ member is required to abide by the NAJ’s Code of Conduct – based on honesty, integrity and professionalism. Members proudly display the NAJ’s Grant of Arms to signify commitment. NAJ members, benefit from support, advice, insight and networking opportunities. www.naj.co.uk