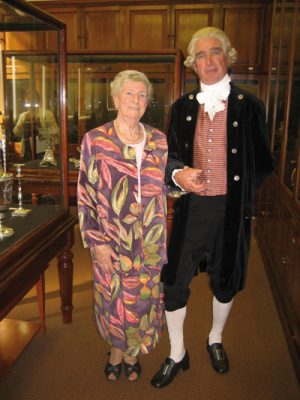 The continuing skill, imagination, and creativity of Birmingham Silversmiths was celebrated in style on a warm summer’s evening on 10th June at The Birmingham Assay Office. Over 150 invited guests visited the ‘Celebration of Birmingham Silver exhibition’ which marked the first ever British Silver Week.

Alongside this The Birmingham Assay Office took the unusual step of opening up its own extensive private silver collection, which includes magnificent 18th Century pieces made at the Soho Manufactory of its founder Matthew Boulton.

The display of silver, amidst the grandeur of the Victorian building told a 235 year long story of craftsmanship, talent, entrepreneurial spirit and sheer hard work.

Kay Alexander, Chairman of The Birmingham Assay Office was extremely enthusiastic about the event. “We have so much to be proud of. It is wonderful to share our passion and commitment for our business and remind people that British silversmiths are still the best in the world.” she said.

“The pieces that were on display are proof that we have a huge pool of talent at work locally. We are very pleased that the independence of The Birmingham Assay Office ‘Anchor’ Hallmark continues to add provenance to these pieces as well as guaranteeing the fineness of the precious metal.”

Surprise guest speaker at the event was Matthew Boulton himself! Boulton regaled his audience with tales of his struggles to found The Birmingham Assay Office back in 1773 and complimented the organisation on being the only one of his enterprises which still survives to this day.

British Silver Week is in its first year and Director Gordon Hamme is very upbeat about the response. “We have 94 silversmiths from all over the UK who signed up in 2008 and we have been overwhelmed by their enthusiasm” he said. “The event at The Birmingham Assay Office has achieved exactly what we set out to do. It has raised the profile of British Silversmiths and exposed their very skilful work to many more people. It has been an excellent event for the Silver industry.”

Work was on show from local individual designers Martyn Pugh, Wally Gilbert, Andrew McGowan, and Esther Lord. They were joined by larger companies, L.J Millington, and F.G.H products all of whom still manufacture in the Birmingham Jewellery Quarter.

During the event Wally Gilbert, one of the exhibiting Silversmiths, presented to the new President of The British Jewellery Giftware and Finishing Federation, Mr David Doyle, a pair of exquisite and stunning Silver Wine Coolers.

Wally’s designs were selected by the BJGF as the winning entrant for a silverware commission to design and produce a pair of wine coolers predominantly made of silver but which would also commemorate the changes to the Hallmarking Act that now allows the use of mixed metals.