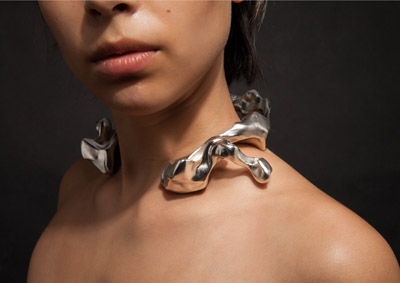 The annual Weston Beamor Award at New Designers, the national showcase for the ‘best of the best’ graduates from the UK’s arts and design colleges and universities, has been won by

Von Trapp’s ‘Uncanny Adornment’ collection of both solid silver and electroformed silver bracelets, neckpieces and earrings, which is based on the concept of finding beauty within and uses human bones and other internal body parts for inspiration, was universally popular with Weston Beamor’s judging panel.

“It really stood out and it was obvious that a great deal of thought had gone into its creation,” says Glen Day, Head of Business Development, at the company. Day and his fellow judges praised Von Trapp’s hand-drawing skills and her consummate use of CAD ‘Z Brush’ software.

“She is clearly a very talented artist but more than that her designs are very much on trend and considerable thought had gone into how they could be produced at a reasonable price and most importantly how the pieces are going to be worn,” says Day. 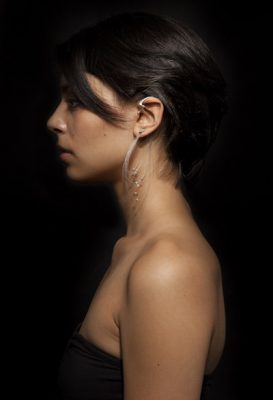 Jewellery making is a second career for Von Trapp, who is American and studied for her initial degree in fashion, and most particularly Men’s Apparel Design, in Rhode Island before moving on to work in the fashion industry designing accessories and leathergoods.

Having completed her MFA in Jewellery at Edinburgh she now plans to return to the USA and to work for a designer jeweller part-time in order to gain experience in how to run a creative-based company, whilst still being able to produce her own work.

“I am keen to learn how to turn my creativity into a way of living,” she says.

“I have spoken to a couple of previous winners both of whom told me they had learnt a huge amount from the experience so I am very excited and really looking forward to it,” she commented.

Examples of Alexandra Von Trapp’s work can be found on her website www.alexandravontrapp.com