Home » Heritage » Something Old Stirring at the Standard Works 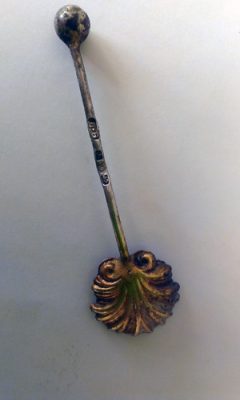 Elisabeth Johnson (Head of Operations at The Standard Works) tells The Hockley Flyer that that during excavation work, the builders found a spoon embedded in the concrete floor – as there was a hallmark visible we investigated for them and identified the spoon as being manufactured by Leech Brothers in about 1894 and was most likely a salt spoon – it is the small bowl that was actually used as the salt spoon, not the shell end!

This would have been made during a time when salt was a valuable commodity and only available at ‘posh houses’, where at the dining table, one sat either ‘above or ‘below’ the salt, defining your position in the household.

Elisabeth also told The Hockley Flyer: “Work at The Standard Works is progressing and the first floor, where the main parts of the college will be, is at painting and flooring stage.

The contractors have done a great job in keeping everything on track despite a huge amount of dry rot we found in the building.

The new flat roof is about to be completed and although it won’t be a roof garden just yet, we are hoping to have some raised beds up there from September.”