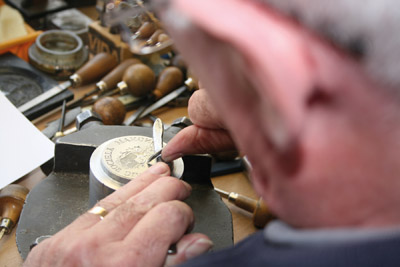 The Director of Town Hall & Symphony Hall, Andrew Jowett, has been honoured by the Birmingham Civic Society, with the award of Gold Medal.

This is the first Gold Medal to be awarded since the Society was granted its Coat of Arms and so it has taken the opportunity to redesign the Medals. The new design has been created by Birmingham’s own Toye, Kenning & Spencer.

Based in the Jewellery Quarter, the company is a long standing supporter of the Birmingham Civic Society and also hand crafted the Medal that was awarded. The company’s senior diesinker, Jim Baker, who cut the dies for the medal, was present at the ceremony.

The Gold Medal is given to individuals who have made a significant contribution to life in Birmingham and who typically have not otherwise been formally recognised, only 37 Gold Medals have been awarded in the 93 years since the Society’s formation.

The Gold Medal has often been the first of many honours to be heaped on these remarkable individuals and Andrew is now joining in company with Sir Simon Rattle, the architect WH Bidlake, founder of the Birmingham Rep Sir Barry Jackson and relief worker and promoter of improved housing Florence Barrow.

Andrew Jowett is receiving it for ‘his significant contribution to Birmingham’s artistic reputation’, having worked in the arts for over 30 years. On graduation from the University of Salford, he was appointed Assistant General Manager at The Crucible Theatre, Sheffield. From 1979-1981 Andrew was Director of Darlington Civic Theatre and from 1982-1988 he was Director of the Arts Centre, University of Warwick. He took up the role of director of Symphony Hall in 1989.

David Clarke, chair of Birmingham Civic Society explained: “Having opened in 1991 Symphony Hall is acknowledged as one of the world’s greatest concert halls and the source of great civic pride.

From the outset, Andrew has been responsible for its artistic programming, operation, and management and, with his team, is credited with having created an outstanding programme of activity at Symphony Hall that appeals to a wide audience – the classical programme being complemented by jazz, world music, folk, rock, pop and stand-up comedy – together with a community engagement programme that reaches 10,000 people each year.

In 2007, Andrew oversaw the successful re-opening of Town Hall, which has immediately regained its place at the cultural heart of Birmingham. It is in recognition of his contribution that the Trustees of the Civic Society have chosen to recognise Andrew in this way.”

Andrew was awarded the Gold Medal following a ceremony during which Birmingham Symphony Hall itself was awarded the Birmingham Civic Society’s prestigious Forward Prize for the breadth of its programme combined with its proactive engagement with the local community.

“I was thrilled to see the medal being awarded and the pride with which Andrew Jowett received it,” explained Jim. “We take great care over the manufacture of this and other medals and rarely get to see them in the hands of the recipients and so this was a particular pleasure.”