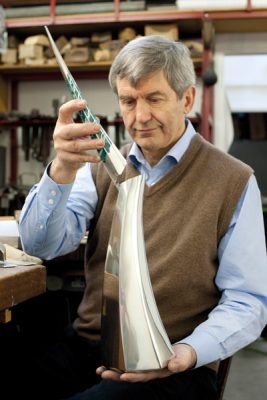 Hector Miller, Silversmith and Prime Warden of the Goldsmiths’ Company.

The Goldsmiths’ Company has a new Prime Warden, the acclaimed British silversmith Hector Miller. Following the traditional Company service at St Vedast’s Church in the City of London Hector Miller took over the role of Prime Warden on Wednesday May 18, 2011.

Hector grew up near the village of Rusper in West Sussex and while he might easily have studied music and become a flautist, he chose a career in three-dimensional design and metalwork instead. In fact it was while watching a silver flute being made for him when he was only 15 that his life-long love affair with silversmithing began.
After graduating from the Royal College of Art in 1971, Hector initially worked for silversmith Stuart Devlin, before establishing his own successful silversmithing company in 1974. Based in a workshop in Camden Town, which formerly belonged to another renowned silversmith, Leslie Durbin, Hector is today regarded as one of the country’s leading designer silversmiths.

At the height of his manufacturing career, Hector employed 15 skilled craftsmen but at the beginning of the new millennium he decided to return to first ambitions and concentrate on the creation of individual sculptural silver pieces that are made using a technique he pioneered of fusing component parts together.

The Goldsmiths’ Company’s summer exhibition ‘Mindful of Silver’, which opened at Goldsmiths’ Hall on May 27 and is the first major event of his Prime Warden’s year, is Hector’s initiative and summarises much of his design and creative ethos. In this exciting and stimulating exhibition, Hector’s work is shown alongside that of 11 other
leading British silversmiths in a way which challenges perceptions of the modern day silversmith. The show, curated by Julie Chamberlain, features a vessel made by each of the featured silversmiths. The 12 vessels are therefore pivotal in helping to illustrate the intellectual and practical design process involved in the making of innovative, design-led contemporary silver.

Hector explains; “As a designer I am often asked where ideas come from. ‘ Mindful of Silver’ presents some of the creative processes that prompt new work and demonstrates the varied ways in which I, and fellow exhibitors, arrive at our own unique solutions to the challenge of a commission.”

The creative process of each silversmith is vividly revealed through an honest reportage animated with a fascinating, disparate collection of preparatory work from tea stained scribbles, drawings in different mediums, photographs, text, objects, models and material samples. Inspiration for Hector’s new work comes mostly from his love and concern for the natural world.

The vessels he has designed and made for ‘Mindful of Silver’ are inspired by many points of reference, illustrated in the exhibition by a photograph of some of the objects and pictures from around his studio. With strong, clean lines, they are enhanced simply by the reflectivity of the silver which provides surface complexity, as well as by additional enamel detailing by Hector’s wife, enameller Frances Loyen.

As the new Prime Warden of the Goldsmiths’ Company, a role which comes with the considerable task of leading the Company, Hector will have limited time for silversmithing over the ensuing months. One of the landmark events which will take place during his year as Prime Warden is the opening of the Goldsmiths’ Centre, an initiative in which Hector has played a key role since its inception in 2006.

The Goldsmiths’ Centre will comprise a multi-faceted amenity, and will be home to a new training and education facility to be known as the ‘Goldsmiths’ Institute’ which will offer a range of education and training, in addition to other specialist training opportunities for the wider industry. The Centre will also provide workshops, studios, conference, seminar and exhibition space and a café.