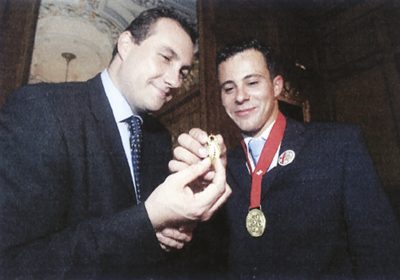 Ex-Goldsmiths’ Company apprentice, Andrew Wood (22), was recently awarded a Bronze medal in the jewellery section of the WorldSkills Competition 2003.

Peter Taylor, Director Technology, and Training of the Goldsmiths’ Company, which provided sponsorship for Andrew in the competition, said: “This is a fantastic achievement. We are all extremely proud of Andrew. The competition was extremely high and he more than proved himself. The award also speaks volumes for the standard of jewellery making in the UK.”

The WorldSkills competition takes place every two years and was set up in 1950 as a forum for young people to demonstrate their vocational skills and achieve world-class standards of competence. This year there were 40 different trades represented and all the competitors were aged between 18 and 23. The jewellery section comprised 11 competitors representing their respective countries. The competition took place from Thursday 19 to Sunday June 22 in St Gallen, Switzerland.

Andrew Wood, who comes from Northfleet in Kent, was the United Kingdom’s jewellery competitor. Andrew had been a Goldsmiths’ Company apprentice, for four years, to jeweller, Kevin Siggers, whom he still continues to work for and under whose watchful and experienced eye he was trained to such an exacting standard.

Only five marks separated gold from bronze, which indicates how close the standard was at the top end. The Italian competitor was also awarded a Bronze medal, with the Silver medal going to Thailand and the Gold medal to Korea.