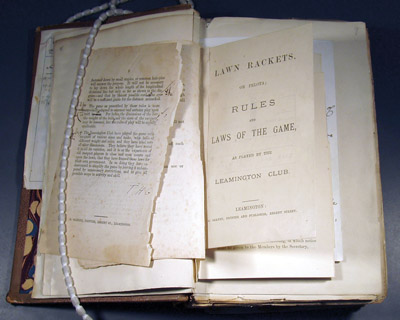 A seemingly unremarkable brown book, now over 120 years old, is in urgent need of conservation before it goes on display to the public, for the first time in its history, in May at the Barber Institute of Fine Arts.

The ‘Gem Scrapbook’ is held in the archives of the Birmingham Central Library and contains newspaper cuttings, correspondence, photographs and drawings giving an insight into the life of Major TH Gem, known to all as Harry.

Together with his friend JBA Perera, Harry was the originator of the game of lawn tennis back in the 1850s. Their first experiments were played in the garden of Perera’s home in Ampton Road, Edgbaston in 1859.

“To lovers and historians of lawn tennis the Gem Scrapbook is the equivalent of the Holy Grail containing as it does copies of the first printed rules of the Leamington Club, the world’s first lawn tennis club set up in 1872 by Gem and Perera,” comments Bob Holland, founder and trustee of The Harry Gem Project, who has launched a public appeal for the £1,000.00 needed for the conservation work.

The conservator reports: “Harry Gem’s scrapbook is made up of various sized items bound together into a volume. The items have been pasted onto guard papers which have then been stitched into the spine.

This method of binding often causes damage to the items within. The item in question is very fragile and has split along the edges of the guard papers. Several pages have become completely detached. The position of the item within the binding and the design of the binding itself do not lend themselves well to display because of the shallow angle of opening.

The preferred option is to remove the item from the binding completely for repair. This may damage the binding and result in the stitching of other areas coming undone, loosening of the pages etc. It would therefore be advisable to break down the volume and store the material as individual items in polyester sleeves, rather than having them rebound. This would benefit the items themselves (particularly the photographs and news cuttings).”

The first donation to the fund comes from Wright Hassall, the Leamington law firm which, as executor to Harry’s widow, presented the scrapbook to Birmingham Central Library in February 1900 following Ellen’s death in December 1899.

Professor Ann Sumner – herself a keen tennis player – is curator of the Court on Canvas: Lawn Tennis in Art exhibition at the Barber Institute of Fine Arts 27th May – 18 September 2011. Professor Sumner says: “The Gem Scrapbook will be a vital part and key focus of A Gem of a Game, a complimentary exhibition running alongside Court on Canvas which will explore the early history of lawn tennis and its local connections through artefacts such as early tennis racquets and equipment, women’s tennis outfits and other fascinating memorabilia.”
For more details and information on how to donate go to www.theharrygemproject.co.uk.

(A commemorative plaque to Major TH Gem can be seen in Warstone Lane Cemetery (Section ‘C’).

The Harry Gem Project
The purposes of the charity is to celebrate and publicise the life of Thomas Henry Gem (1819-1881) through publications, exhibitions, community events and a dedicated web site; to publicise his role as the originator, with his friend JBA Perera, of lawn tennis here in Birmingham and the creator of the world’s first lawn tennis club in Leamington Spa; to produce and publish the history of Edgbaston Archery & Lawn Tennis Society, the oldest lawn tennis club in the world, where Harry Gem was a member in the 1860s, including the history of the origination and rapid development of lawn tennis in Birmingham and Warwickshire.

Also to distribute the book to schools and libraries in Birmingham free of charge; to devise and promote a Birmingham lawn tennis trail; to restore and maintain Harry Gem’s grave in Warstone Lane Cemetery; to create a lawn tennis history display to be erected in the grounds of Edgbaston Archery & Lawn Tennis Society and to work with other interested parties to establish a higher profile for this important aspect of Birmingham’s sporting heritage.