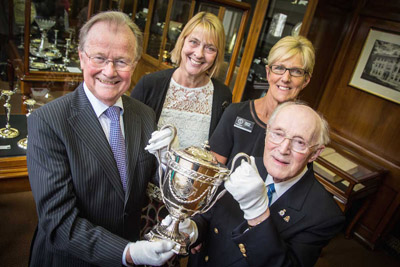 Assay Office Birmingham last week began saying farewell to its historical headquarters on Newhall Street, ahead of its move to a brand new facility this summer.

Friday June 19th saw employees past and present, customers and VIP guests celebrate the successful completion and launch of a year-long Heritage Lottery Funded project that recounts the history of Assay Office Birmingham and its iconic Jewellery Quarter building.

The project has led to the creation of the recently-launched Assay Archives website, showcasing Assay Office Birmingham’s entire private Silver Collection and making its Library catalogue available to browse online.

The Assay Archives website has also captured the spirit of the Assay Office through 29 Oral History Interviews with current and former employees and customers.

The Heritage Lottery Fund has enabled Assay Office Birmingham to deliver this project to capture the spirit of life in Newhall Street.

It also makes the private collections of silver, coins, medals and medallions, and books accessible to a much wider audience as an informative and educational online resource.

Attendees at the launch event included representatives from Heritage Lottery Fund’s West Midlands Committee, the University of Birmingham, the V&A Museum, Lunar Society, staff that had been employed to deliver the project and many of those interviewed for the oral history project.

Guests were welcomed by current Senior Warden Noel Hunter, while project manager Kate Iles and oral historian Helen Lloyd entertained with an explanation of the Assay Archives website and some snippets from the oral history interviews. Afterwards, guests explored the Silver Collection while sharing their personal experiences of the Office and the project.

The event had extra poignancy as it was the very last formal event to be held at the historic Assay Office Birmingham building. The Newhall Street Assay Office was purpose built in 1877 but due to the rapid expansion of the trade was almost immediately found to be too small.

Another large section was added in 1885 and by 1914 – when hallmarking volumes in Birmingham hit 13 million articles – the building had been expanded to three times its original size. Subsequent additions and movement of internal partitions during the 20th century created a building that is a labyrinth of passages and stairs, constraining the efficiency and growth of the business.

Maintaining ‘business as usual’, this summer Assay Office Birmingham will move to its new purpose-built premises on Moreton Street, remaining in the Jewellery Quarter to keep heritage at the heart of the business. The Assay Office move is being carefully phased to ensure no disruption to business and will be completed by the end of July.