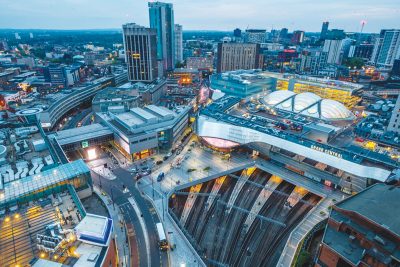 Birmingham city centre from above

Birmingham City Council has launched a series of webinars to help residents, city centre workers and businesses prepare for the Clean Air Zone, which launches on 1 June 2021.

The zone will cover an area of the city inside the A4540 Middleway and will help to improve air quality. From 1 June 2021 the owners of the most polluting vehicles will need to pay a daily charge to enter the zone.

The council’s modelling suggests approximately a quarter of vehicles entering will need to pay the charge so is encouraging everyone to prepare for the Clean Air Zone by checking the online vehicle checker as soon as possible at www.gov.uk/check-clean-air-zone-charge.
As part of its preparation for the launch of the Clean Air Zone the council is also introducing a series of webinars so that residents, city centre workers and businesses can find out about the zone, how it operates and the support that is available.

Cllr Waseem Zaffar, Birmingham City Council’s Cabinet Member for Transport and Environment, said: “There are less than four months to go until Birmingham’s Clean Air Zone goes live on 1 June. There are still a lot of myths, misunderstandings, and confusion in circulation. These webinars will provide people with an opportunity to separate fact from fiction by hearing directly from the team responsible for the zone’s delivery.

£5,000 Grant for Taxis
Birmingham City Council has announced a new £5,000 grant for Birmingham-licensed hackney carriage drivers.
The grant is part of the £15m grants package which is being used to support Birmingham’s hackney carriage and private hire community to prepare for the launch of the Clean Air Zone on 1 June 2021.

Birmingham-licensed hackney carriage drivers can now apply for £5,000 towards the cost of a Euro 4 petrol or Euro 6 diesel taxi (or better), except those eligible for the government’s plug-in grant, which includes vehicles dating back to approximately 2005 and late 2015, respectively. The Government’s vehicle checker tool can be used to find out if a vehicle will be subject to the daily charge.
Cllr Waseem Zaffar, the council’s cabinet member for transport and the environment, said: “We recognise that like so many, it has been a difficult year for our hackney carriage drivers, and we know that they want to be part of the journey to creating a clean air city. This new grant will provide them with more options to upgrade or replace vehicles that would otherwise be subject to the daily charge.”

In March 2019, the Government provided Birmingham City Council with a total of £7.75 million of funding to deliver the hackney carriage support grants, including the £2.5 million retrofit fund which will be used to support this new grant option.
The council also received £9 million of funding for private hire drivers to apply for grants to upgrade to Euro 4 petrol/ Euro 6 diesel, a ULEZ or hybrid vehicle.
To be eligible for the grant, hackney carriage drivers must have been licensed by Birmingham City Council since 10 September 2018 and be the registered owner/ keeper of a non-compliant vehicle.

Birmingham’s Clean Air Zone will go live on 1 June 2021 and will charge the most high-polluting vehicles to drive within the A4540 Middleway (but not the Middleway itself). Cars, taxis and LGVs (vans) will be charged £8 a day whilst coaches and HGVs will be charged £50 a day.