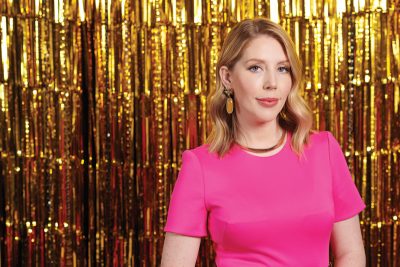 All That Glitters’ is a talent search to find Britain’s most brilliant jeweller – showing on BBC2 at 8pm on Tuesdays, beginning 13 April).

Betts Group has revealed that it was the primary supplier of precious metal used in BBC 2’s primetime jewellery series, ‘All That Glitters’.
The historic family-run firm, which specialises in supplying responsibly mined gold to investors and the jewellery trade, has supplied the new show with a range of products manufactured using Single Mine Origin (SMO) gold.

They include SMO gold billet, sheet, round and rectangular wire, round tube, and casting grain, sourced from the Yanfolila gold mine in Mali.
Each of the eight jewellery makers featured in the show also received an 80-gram package from Betts containing Fairtrade sterling silver.
Additional items including Fairtrade gold, recycled silver and 9ct yellow and white gold products were also supplied from Betts’ workshops in Buxton and Birmingham.

Launched by Betts in 2018, SMO certified gold denotes gold that can be directly traced to a single responsibly operated mine.

It is externally audited to operate to international best practice in terms of corporate, social, and environmental responsibility.

Betts Group managing director, Charlie Betts, said: “All That Glitters’ is an exciting series that is giving a primetime platform to some of the UK’s most talented jewellery makers. It’s also an opportunity to showcase the sustainable options that are increasingly available to jewellers and consumers of precious metals. Material provenance is the single greatest focus of our strategy and we’re proud to supply SMO gold, alongside our continued partnerships with Fairtrade and Fairmined. We believe that informed and responsible product sourcing should be a priority across the industry.”
The six-part series, filmed at Birmingham School of Jewellery, will see eight of the UK’s best jewellery makers battle it out to make two pieces set by the judges.

The first piece is designed to appeal to a mass audience and the second tailored for a client in need of a statement piece for a special occasion.
The show is fronted by Katherine Ryan and features a judging panel that includes award-winning British designer Solange Azagury-Partridge and Shaun Leane, who has created ground-breaking catwalk jewellery with Alexander McQueen, and designed Princess Beatrice’s engagement ring as well as fine jewellery for clientele including Lady Gaga and Elton John.