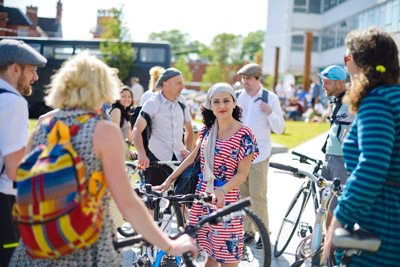 On Sunday 19th July, around a hundred cyclists gathered for Birmingham’s 4th annual Big Vintage Ride. Dressed in vintage attire and riding vintage bicycles, they celebrated the long-standing appeal of the bicycle as a sustainable and enjoyable means of transport.

The day began at 2pm with an informal picnic in St Paul’s Square in the Jewellery Quarter. They set off on a leisurely ride around the city centre at 4pm, before partying the evening away at the Rose Villa Tavern.

The ride coincided with the Jewellery Quarter Festival, which included a helter-skelter and free outdoor performances including musicians, bands, theatre and dance troupes.

Phil Ward, a local musician who participated in the ride, said “It was a really lovely day, I always enjoy cycling around the city, but it’s fun to cycle with such a great bunch of people – a really great vibe and some lovely outfits. Cycling is becoming more and more popular in Birmingham and on days like this, it’s easy to see why.”