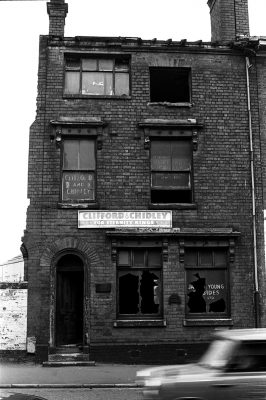 Brian Homer recently got in touch to say “I recently found some images of Birmingham in my archives from the 70s and have printed a Zine. Included are ten or so pictures of the Quarter. To see the ‘Zine go to https://tinyurl.com/23yfhncd”

Brian added “At the time I took the pictures I had co-founded Grapevine Magazine (a What’s On and News magazine which ran from ‘71 to ‘75) with my friend Trevor Fisher (who was born in Hockley and went to All Saints School). Some pictures were published in Grapevine including the one of “Windolene Sparkles” – from Cattell Road on the East Side.

The JQ ones were probably from a day walking round with Trevor. After we closed Grapevine, we did Broadside Magazine for a few more years. In 1978 I started a design agency called Sidelines and under different names ran an agency from then until 2015 – at the end it was called Homer Creative. In around 1997 I moved into the 7th Floor of the Big Peg and then in 2003 to Newhall Place in Frederick Street.

Finally, we bought a unit in Hylton Street in 2006 which we still own but now rent out. In a circular coincidence the picture of the old General Cemetery has at the top left the rear of the building in Hylton Street that we bought the unit in 35 years later! And beyond the fence to the right a relative of Trevor’s is buried in a collective grave.

Oh, and I posted the picture of the Jewellery worker off Regent Place on FB and found out his name was Charlie Harris, and he was the last Sandcaster Birmingham.”

A jeweller retired for over 12 years got in touch with The Hockley Flyer to say, “That window on the right-hand side, I used to work there.” He confirmed it was 190 Warstone Lane, two buildings from the corner of Augusta Street and demolished to make way for The Hockley Centre (Big Peg). The white wall on the left he says was a ‘proper’ garage with two petrol pumps. At the back was a junior school and close buy was a bakery so sometimes difficult to remember it was a manufacturing area. Also, an elderly lady lived upstairs in the building, but she fell down the stairs, went to hospital but never returned – caught pneumonia after breaking her hip.