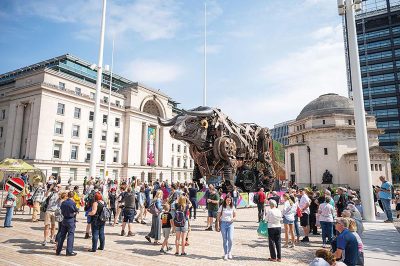 The Birmingham 2022 Opening Ceremony Bull will remain on display in Birmingham following the conclusion of the Games.

Games partners have agreed the undoubted star of the Opening Ceremony will continue to reside in Centenary Square until the end of September.

The extended stay of the extremely popular Bull will allow more residents and visitors to view the Bull and continue the celebrations in line with the Birmingham 2022 Festival drawing to a close.

Cllr Ian Ward, Leader of Birmingham City Council, said: “We are delighted with the response the Bull has had from the Opening Ceremony which reflects our history.

“The diverse history of Birmingham is one of the reasons we were successful in our bid for the 2022 Commonwealth Games and the way residents and visitors have embraced the Bull shows how important this is.
“The Opening Ceremony’s narrative illustrated how, by working together and understanding each other, we can overcome barriers and continue having challenging conversations looking forward to creating a bolder and more inclusive Birmingham.

“We consider this one of the top attractions in the city and seeing residents and visitors enjoying the Bull being in the city this week, has been brilliant and enhances the need to keep the Bull in the city for longer.”
Commonwealth Games Minister Nigel Huddleston said: “The Bull had an important story to tell on women’s rights and the city’s industrial heritage during the Opening Ceremony. It has captured the public’s imagination, brought culture to a mass audience, and shown that Birmingham 2022 is about more than the world-class sport on show.

“I hope the Bull, the Commonwealth Games and its cultural programme leave lasting memories for those who have experienced it, and that they encourage more people to get involved in the West Midlands’ rich artistic and cultural offering.”

Discussions are ongoing among Birmingham 2022 Games partners about what will happen to the Bull when the Birmingham 2022 Festival closes at the end of September.
The six-month long festival launched in March will sustain the celebrations and excitement in the city after the Commonwealth Games.
This will include the world premiere of a Peaky Blinders dance theatre event at the Birmingham Hippodrome and the spectacular PoliNations in Birmingham’s Victoria Square, as part of Unboxed Creativity in the UK.