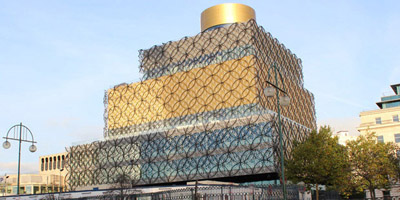 The British Library already has a strong partnership with the Library of Birmingham through their joint commitment to supporting entrepreneurs and small businesses. The Library of Birmingham launched its Business & IP Centre last year, joining a growing network of libraries offering a dedicated space for entrepreneurs in a project spearheaded by the British Library, who have been running their own Business & IP Centre in 2006.

The new initiative will expand on this, bringing together curatorial expertise to take advantage of the world class collections of both libraries in a series of activities for 2016. These include a proposal to work together on a special project around the time of the 400th anniversary of the death of William Shakespeare.

Cllr Penny Holbrook, cabinet member for skills, learning and culture said: “The British Library’s collections and curatorial expertise is a world class asset which further enhances the renowned collections at the Library of Birmingham, including our Shakespeare and photographic collections, and draws on our reputation for engaging with local communities.

“This new partnership will be an opportunity to test new ways of working together to increase the impact of both organisations during the Shakespeare anniversary year. It will also start a programme of sharing skills across our workforces which I hope will lead to further opportunities for collaboration in the longer term.

“I am delighted that Birmingham is at the forefront of this development and look forward to continuing to develop our partnership with the British Library which already has strong foundations in the work we have delivered through the Business & Intellectual Property centre.

“However, we must recognise that this will not solve all the challenges we face with the Library of Birmingham, but it is a positive start for looking at different ways of working.”

Roly Keating, Chief Executive of the British Library said: “We’re delighted to be building on the strong foundations of our existing work with Library of Birmingham as part of the network of Business & IP Centres in public libraries across the country. As custodians of two of the world’s greatest Shakespeare collections, it’s especially exciting that our two libraries will be working closely together during next year’s anniversary celebrations.”