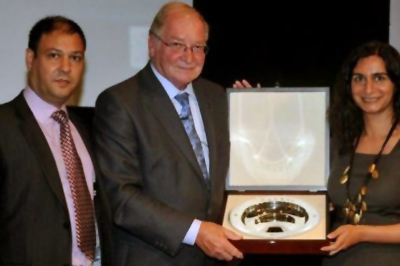 Birmingham City Council was the well-deserved winner of the inaugural Touchstone Award presented by the British Hallmarking Council at the recent TSI annual Consumer Affairs and Trading Standards Conference and Exhibition in Manchester. The Award is made in recognition of the most innovative initiative in relation to Hallmarking.

The UK has one of the most rigorous and long-established Hallmarking regimes in the world which delivers clear benefits to UK consumers and jewellers.

With precious metal prices at an all-time high, the hallmark is more important than ever and the British Hallmarking Council is keen to encourage Trading Standards authorities to continue to enforce this important legislation.

The winning entry, presented by Chair of the British Hallmarking Council’s Education and Enforcement Committee Mike Drewry, was received on behalf of Birmingham City Council by its Head of Trading Standards Sajeela Naseer.

It featured an exercise managed by Trading Standards officer Gary Singh who has developed an effective long-term enforcement project targeting the significant Asian jewellery community in Birmingham where un-hallmarked and under-carated goods are commonly found. Previous enforcement activity has driven a significant improvement in the level of compliance.

In 2011 a well-organised campaign targeted 21 Asian jewellers and 19 others over two days. In total 12 of the Asian jewellers were found to have non compliant product and 104 articles, with a value of over £50,000 were seized.

All other premises were found to be compliant. British Hallmarking Council member Robert Grice, who has driven the Touchstone award from inception to presentation, said: “Birmingham’s entry was first class. It detailed a well-planned, long-term exercise which is being regularly monitored to measure its success.”

Two further authorities, Wandsworth Council and the London Borough of Croydon, were Highly Commended for their entries.

Birmingham City Council are the first holders of the Touchstone Award, a 12 inch sterling silver dish with a value of £3,000. The Award was made in Sheffield and bears a complete set of hallmarks including the unique Diamond Jubilee mark. It also carries the town marks of all four UK Assay Offices, Birmingham, Edinburgh, London, and Sheffield who funded the initiative. Gary Singh receives an individual award of a silver Business Card holder in recognition of his personal contribution to the project.