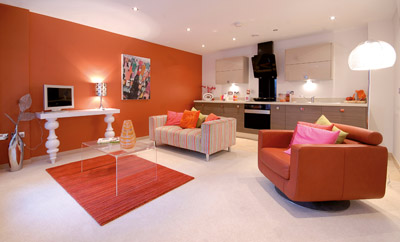 The 148 apartment scheme, on St Paul’s Square, is the largest residential development to be launched in the city for more than a year.

Marketing commenced in January 2010, when the £35million building opened to the public for the first time. St Paul’s Place, on St Paul’s Square, includes a range of studio, one and two bed apartments, plus three penthouses, set around two internal courtyards.

Chord has spent more than three years developing the scheme, which includes the restoration of the façade of the Thomas Walker building, the former buckle maker manufacturer, which fronts onto St Paul’s Square, Birmingham’s only Georgian square.

Chord has created two courtyards and added three new wings to the ex-factory, on Northwood Street, Caroline Street and James Street. The new build extensions have been built in red brick, to reflect the original building.

At the heart of the development is a communal courtyard, designed by award-winning landscape artist Alan Gardner. A footbridge across this outdoor oasis connects the lobby area with the residents’ underground car park, which has spaces for 145 cars.

In addition to the courtyard, the development boasts an impressive communal lobby where visitors will be greeted by a 24-hour concierge. The entrance is styled along the lines of a boutique hotel and provides lift access to all five floors of the development.

The apartment fit-out is contemporary, with Porcelanosa-designed fitted bathrooms and modular kitchens by Mereway, each with integral fridge/freezers, washing machines and dishwashers. Flooring includes a choice of carpet and wood laminate. Chord is a Jewellery Quarter-based property company.

Geoff Shuttleworth, a director at the company, said: “This development has been three years in the making and we are delighted to be bringing it to the market. “Our aim has been to deliver the best specified residential development in the City, equivalent to a five star hotel. To this end, we have sourced unique products from around the world: doors from Italy; marble cladding from Turkey; bathrooms and ceramics from Spain. Our research and resourcing policy has been painstaking and is reflected in the end product.”

The development will be showcased to the public during a series of open weekends during February. Private appointments can also be arranged through sole agents Savills (tel: 0121 643 8484).

Lisa Hunt, head of the residential sales team at the Birmingham office of Savills, said the internal specification of the apartments, the remedial work undertaken to the existing building, and the attention paid to the exterior and common areas, singled it out from other City Centre developments.

She said: “The launch of St Paul’s Place will be the residential highlight of the year. It is undoubtedly the best apartment development in the City Centre, delivering urban, modern living in a building deeply rooted in the City’s history. It is undoubtedly the most prestigious address in the Jewellery Quarter, if not the City. The appeal of this part of Birmingham – with its eclectic range of restaurants, bars and other leisure and cultural attractions adds to its appeal,” she added.