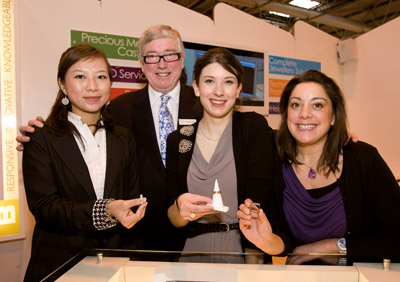 Siobhan Maher a student at the Jewellery School of Birmingham City University has won an annual jewellery design competition organised by Weston Beamor, one of the Jewellery Quarter’s most long-established casting companies.

As part of her prize, Siobhan’s winning design was manufactured by Weston Beamor and displayed before an international audience at ‘The Jewellery Show’ – one of the country’s largest trade exhibitions – which is currently running alongside Spring Fair International at the National Exhibition Centre.

All second year students studying for a Higher National Diploma in Jewellery and Silversmithing at the School of Jewellery take part in this competition as a compulsory element of their course.

Their brief for 2010 was to create a design for a man’s ring aimed at a target audience of their own choice. As well as designing the ring using computer aided design, they were also asked to create appropriate ‘virtual’ marketing based around their design concept.

Siobhan’s organically shaped range of 18ct yellow and white gold stacking rings, with accent diamonds, is called ‘Inferno’ and her accompanying advertisement shows a couple locked in a steamy embrace. The name and the concept speak for themselves: this is hot stuff!

There were two runners-up in the competition. Jo Jo Genovia from Oxfordshire, whose ‘Balmoral’ design, incorporates patterns from tweed country clothing and is aimed firmly at ‘Cotswold Gentlemen’, came second.

FangFang Qiao, from Wuhan, a city in the middle of China, came third with ‘Intersection’ a strong, geometric, unisex, design based around the advertising line ‘meet me at the crossroad’.

“This competition provides an excellent opportunity for our students to get a realistic taste of what it’s like to design for a company within a specific commercial brief,” says course director, Gaynor Andrews. “For the winners to have access to Weston Beamor and to be able to question their in-house design and production team is a huge bonus. For the winners seeing their finished designs created for them by Weston Beamor is a prize in itself.”

“It is always extremely gratifying to see the level of talent amongst BCU’s HND students,” says Patrick Fuller, chairman of Weston Beamor. “The standard was particularly high this year and the judging panel had a difficult task deciding who should win. We are glad to be able to work with the university in this way to give their students a taste of the industry they will be entering.”

As well as the honour of winning the competition, the three students will each receive a cash prize and will also be offered a period of work experience at Weston Beamor during which they will be encouraged to further hone their design skills and to learn more about jewellery production processes.

Jewellery design is a second career for Siobhan, who already has an English degree and worked as a recruitment consultant before enrolling on the HND course. “I’ve always loved jewellery and know that I am now doing exactly what I want to do. I particularly love CAD work so winning this competition was hugely exciting and is also an affirmation that I have the right commercial mind set to hopefully make a success in the industry,” she commented.

The three winning designs together with the virtual advertisements from all those who entered the competition were displayed on the Weston Beamor stand at The Jewellery Show, at Spring Fair Birmingham where they attracted considerable attention from visitors to the show.