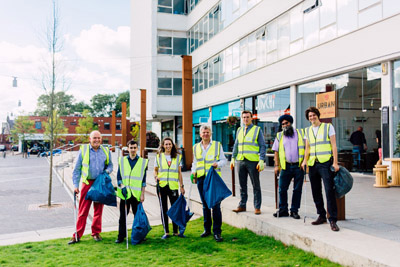 After a call out for volunteers, the JQBID was joined by over 24 members of the local community from companies including Fellows & Sons, T.H. March and Rock N Roll Brewhouse, and residents who worked tirelessly over the course of two hours to contribute to a cleaner and safer JQ.

Clearing over 67 bags of rubbish from across the Quarter, areas surrounding St Paul’s Square, the Chamberlain Clock and the Museum of the Jewellery Quarter were all included in the clean-up and has created a more welcoming environment for both visitors and locals to live, learn, work and enjoy.

Luke Crane, manager of the JQBID, says “It’s amazing to see the whole community come together and volunteer their own time towards cleaning up the Jewellery Quarter.

From local businesses and residents, the combined effort of all has resulted in a visible difference on our streets and shows just how much can be achieved in a short space of time when members of the community join forces.”

To support this community initiative, the JQBID will roll out its own cleaning regime towards the end of October which will continue to monitor the streets of the JQ and keep it clean for everyone to enjoy.

Editorial comment:
30 Years after supreme efforts to organise regular cleaning of the Quarter, it would appear that it is to become a ‘DIY job in future – despite revenue from residents’ council tax, and from the large number of firms who also pay a BIDS levy! In other words, the Council are paid twice to do a task which the Jewellery Quarter community are doing ourselves!
Nice though to see people in the Quarter having a laugh together!

The Jewellery Quarter in 1986 – 30 Years Ago
As reported in Issue No 28 of The Hockley Flyer, due no doubt to editorial pressure, Birmingham City Council confirmed that public toilets and road/pavement improvements were in the pipeline, and the first road signs appeared showing ‘Jewellery Quarter’ – the name also appearing on buses and at bus stops.

Also due to pressure to clean up the area, for the first time ever, road sweepers appeared in the Jewellery Quarter and ‘special’ black and gold waste bins started appearing.

In 1986, one of the most successful Regeneration Schemes was launched by URBED (Government funded) led by Ted Manders and his team, who, under the name of ‘Jewellery Quarter Action’ organised, amongst other things, the first ever JQ Festival.