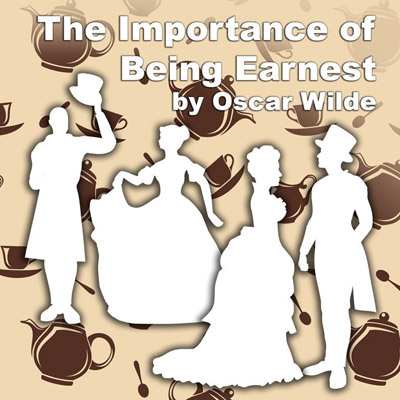 The dependable Jack Worthing, a pillar of the community, is profoundly in love with Gwendolyn Fairfax, daughter to the imposing Lady Bracknell.

Jack’s closest friend, the dashing aristocratic playboy Algernon Moncrieff, is besotted with Jack’s ward, the beautiful (and extremely wealthy) Cecily Cardew. Sadly, for both suitors, however, Gwendolyn and Cecily are in love with someone else. Someone called Ernest . . .

All is not lost, however, as it seems that Ernest bears a striking resemblance to Jack – and, strangely, also to Algy.

Hardly surprising, given that Ernest is an imaginary ‘brother’ invented by Jack allowing him to woo Gwendolyn in disguise – and also an alter ego that Algy assumes to pay court to Cecily under Jack’s very nose.

But when a series of revelations concerning handbags, nannies, novels, prams, lost babies and Victoria Station threaten to unravel Jack and Algy’s web of deception, the men are forced to reveal their true identities – or are they?

The Blue Orange Theatre presents Oscar Wilde’s comedy of manners for serious people featuring one of British Theatre’s famous battle-axes and the perfect play for a Spring evening.

Performances from 28th April to 7th May