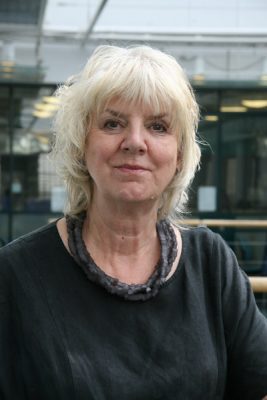 Gay joined the School of Jewellery in 1992 as Industry Coordinator and became Centre Manager of the Jewellery Industry Innovation Centre (JIIC) in August 2000. After 24 rewarding years she will retire on April 1st.

Gay’s career has been inextricably linked with the jewellery industry and she has been instrumental in the success of many projects which have led to the growth of the School’s reputation as innovators in cutting edge technology, and played a significant role in the UK jewellery industry specifically but also internationally.

She has led the JIIC team in the support, development and growth of designer makers and SMEs regionally and nationally within the Jewellery industry, and established significant national and international industry and educational contacts that have enhanced significantly the reputation and practice of the Centre.

“I have been privileged not only to enjoy my job, but to also play a part in many innovative initiatives and projects, and to meet and work with some very talented and dedicated people within our industry.”

There will be an industry get together in Birmingham on Thursday April 14th at 5.30pm upstairs in Vertu Bar if you are able to attend please contact Gay for details.

The recent development of the Technology Hub within the School of Jewellery will ensure that the excellent facility and capability of the JIIC becomes more integrated with and a visible part of the School.

The Hub will be managed by Frank Cooper, and will build upon the ethos of being an industry facing activity with a mission to support and accelerate the introduction and adoption of cutting edge technology applications in the jewellery industries but will also broaden its focus by looking to support high value new product development.

A ‘Big Thank you’ to Gay from The Jewellery Quarter
by Marie E Haddleton
A great number of people will know Gay Penfold and been glad of her enthusiasm and support over many years.

Take care Gay – and enjoy a well-earned rest – you have earned it! and rest assured you will be sure of a warm welcome whenever you re-visit the Quarter!