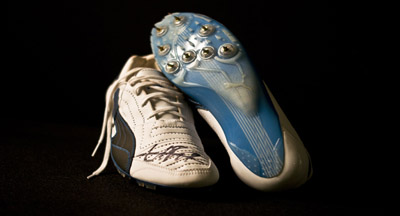 On Monday 23rd July a pair of running spikes that belonged to world record holder Usain Bolt went under the hammer at a private gala dinner at the University of Birmingham.

The auction, conducted by Fellows’ Managing Director Stephen Whittaker, was the highlight of the evening with guests frantically outbidding one another in order to secure themselves a piece of sporting history.

The first lot to take to the stand was a running vest signed by the Jamaican track and field team.

Bidding started at a modest £100 but rapidly reached an impressive £4,200 in the room, selling to celebrity chef and businessman Levi Roots.

The second lot – a pair of spikes signed by the world’s fastest man Usain Bolt – really got the crowd excited.

With a bidding war instantly surfacing, the fascinating sporting memorabilia sold for a staggering £25,000. Eamon Gaughan, founder of The Torque Project, who was the successful bidder said: “It is the best 25 grand I have ever spent! Winning Usain Bolt’s running spikes and meeting the man in person: amazing! Helping to bring a Jamaican student to our great city and one of the country’s finest Universities: even better!”

The money raised will go towards supporting a life-changing opportunity for a student resident in Jamaica to study at the University of Birmingham, delivering a true Olympic legacy for the city and the Jamaican community.