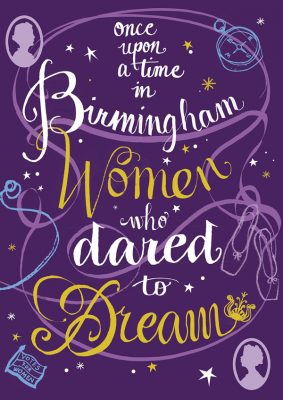 A new book created by and celebrating inspiring Birmingham women and their achievements will be launched at the 2018 Birmingham Literature Festival in October.

As part of Birmingham City Council’s campaign to mark the centenary of some women getting the right to vote in 1918, this colourful book features thirty fearless females who dreamt big and fought for what they believed in, often against the odds.

Once Upon A Time in Birmingham: Women Who Dared to Dream – produced in conjunction with local female-run publisher The Emma Press, author Louise Palfreyman and Writing West Midlands – aims to inspire the city’s next generation of female achievers, leaders and pioneers.

A launch event will be held at The REP’s Studio Theatre on Saturday 13 October at 2pm featuring some special guests, who will share their stories. Tickets are £3 (redeemable against book purchase) and can be booked on the Birmingham Literature Festival’s website – www.birminghamliteraturefestival.org

This bedtime book, which is aimed at children aged 11 to 16, features stories of athletes, campaigners, pioneers, police, engineers, artists and medics – all true and all inspiring.

Meet the world’s first female computer programmer Mary Lee Berners-Lee, staunch activist for women’s rights Jessie Eden, and courageous campaigner for girls’ education Malala Yousafzai in this lively introduction to some of the city’s most awe-inspiring women, past and present.

Given the wide range of women nominated, a team of experts – female writers from Writing West Midlands’ Spark Young Writers programme – were called in to help choose the women featured in this book.

Young writers will also be able to take part in a children’s workshop based on Once Upon A Time in Birmingham: Women Who Dared to Dream as part of the literature festival, which will also be at The REP on 13 October. For more information and to book places, visit www.birminghamliteraturefestival.org