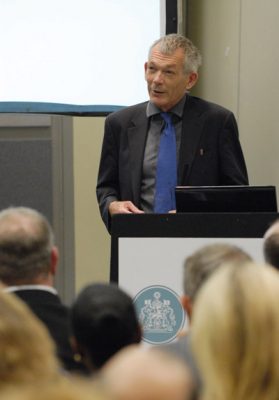 In a compelling presentation, Peter Marsh, manufacturing editor of the Financial Times told a packed audience of industry guests that despite the reported doom and gloom in manufacturing, Britain fares well in the global economy.

He pointed out that although Britain had slipped down the rankings to 9th in the world, Britain was doing rather well to maintain this position in the face of developing countries such as Brazil redressing the manufacturing balance.

He also explained that as we now produce more through technology and automation this in turn accounts for a decline in manufacturing jobs. Marsh said: “There are new opportunities for manufacturing in the richer economies, but these will be through development-led manufacturing that offers shorter production runs, uses new technologies and provides added value.”

The day started with a speech from outgoing President of the BJGF Federation, David Metcalfe, who explained the year had been a challenging and dynamic one for the Federation in tricky conditions. He said: “We have been able to expand the Federation by encouraging other trade associations such as BHETA, to join us.

To this end we have changed the articles of association and we are also changing our name to the more neutral British Allied Trades Federation (BATF) to allow easier integration for other trade associations who wish to join us.”

David then handed over the badge of office to Martin Olsen who became President for the next year. Martin has over 45 years in the surface engineering industry. He originally trained as a chemist and has held senior positions in the industry from the age of 24. He is currently a Sales Director and Partner with Ashton & Moore Ltd, who supply finishes to the aerospace and defence sectors.

Martin was glowing in his praise for David Metcalfe and pledged to continue the good work. He said: “I will be looking to build on the successes of the previous year and the changes that have been made. These give us a great platform to further develop the federation, which is tremendously exciting.” He added: “I am looking forward to my term of office and working with such a strong and dedicated team.”

Three of the largest Federated Associations (the GA, BJA and SEA) provided a fascinating insight into their activity of the last twelve months. Chairman of the GA, Michael Sweeney said: “The GA has performed well over the past year. We added 189 new members in 2010 and continue to have a fantastic retention of supplier membership of 93%.”

He added “Given the uncertain conditions of the economy, the mixed outlook and consumer concerns, broadly our members have performed well, but there is no room for complacency. However there are good opportunities in 2012 with the Queen’s Diamond Jubilee and the Olympics amongst them.” Michael explained many of the initiatives that have made the GA so important to its members.

These included segmentation and targeting to enable better and more relevant communications, the improvement of the website and a highly successful relaunch of ‘Gift of the Year’.

The BJA has experienced an equally challenging and dynamic year fuelled by escalating gold prices, the economy and low cost finished jewellery imports. Chairman Mike Hughes reported that membership was over a 1000 and continues to grow and the past year had been a good year for collaboration and working together with key organisations in the jewellery industry.

He said: “We have forged closer links with many relevant organisations such as the National Association of Goldsmiths (NAG), the retail arm of the jewellery industry, the Responsible Jewellery Council and have incorporated the assets of the British Horological Federation. He added: “This is all part of our strategy to embrace the industry.”

Other developments include, SaferGems (with the NAG and TH March) an initiative that will allow members to report crime and suspicious behaviour and help create one voice on ethical trading.”

Additionally, Huw Williams of the Surface Engineering Association (SEA) outlined the many achievements of SEA in an extremely difficult year. The past year had been one of legislation that affected the members of this worldwide £108 billion industry.

Mike Josypenko, manager of the British Jewellery and Giftware International (BJGI) explained the new service offered by the BJGI which will enable members to do business in China. He explained: “This new service is aimed at both companies who already operate in China and companies who would like to do. For a reasonable fee we can help take the hassle, headaches and problems out of doing business in China.” He added: “Many of these can be a simple cultural misunderstanding and by working with us, you can be put on a strong platform from day one.”

Summing up the day, new President Martin Olsen said: “We are grateful to Peter Marsh of the Financial Times for providing such a fascinating insight into manufacturing and it is comforting to learn that the UK is faring better in manufacturing than we sometimes perceive.” He added: “Over the past year all of the associations in our Federation have responded magnificently to the widely acknowledged challenges and are well placed to provide the very best service and support for their members.”