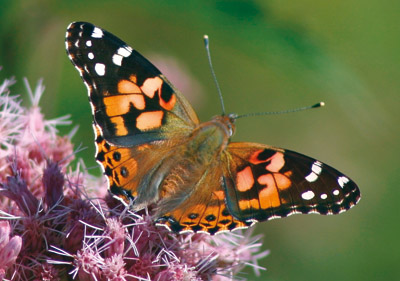 I first came to work in the Jewellery Quarter as a student in the early 1980s. It was a different world then. Apart from the warrens full of little workshops, many of which still exist, there were large buildings where jewellery was produced for the mass market.

Dotted between the buildings were many small car parks, rather unkempt with margins where ‘weeds’ grew in profusion, particularly buddleia, (the butterfly bush), thistles, groundsel, ragwort, rosebay willow herb, nettles and many more; all the untidy native plants which happily grow where no one takes care of them and on which live so many different insects.

There were beautiful butterflies to be seen, tortoiseshells, peacocks, painted ladies. In particular, one, which I soon learnt, was a day flying moth with lovely cerise markings the cinnabar moth. The fascinating caterpillars, orange and black striped living on groundsel and ragwort, could be seen everywhere.

Now as I walk between my workshop in Warstone Lane and the RBSA gallery I rarely see the caterpillars and never see the moths. On the two occasions in recent years when I have seen them the food plants have suddenly disappeared in mid season as workmen have come along with their weed killer sprays.

This also means that the small birds, which one used to see, have gradually disappeared although we have a plethora of pigeons and seagulls.

What has replaced these car parks and sprung up where previously people worked producing wealth for the area? Block after block full of small, expensive dwellings, for fashionable people to buy for investment, and let to students and young people.

The retail businesses, like the RBSA, depend on their customers being able to find car-parking places around the area. I am sure that is one factor contributing to a local decline in sales. New blocks are still being started whilst existing apartments are increasingly difficult to let.

I believe it was a very good policy to build some apartments in the Quarter but the rush for profit that has resulted has changed its nature totally; our environment is becoming impoverished – the promises of a Jewellery Quarter Village where the opinions of the local workers would be taken into account have all been broken.

In the end the places where we live and work are taken completely out of our control and we are all the poorer for it.