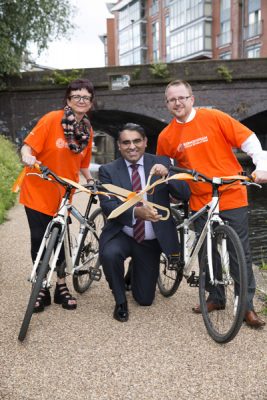 Proposals to improve cycling conditions on main roads are being revealed on Monday 7 July at the start of a six-week consultation period. The proposals are part of the 20-year Birmingham Cycle Revolution initiative to make Birmingham greener, safer, healthier and less congested.

The first highways routes being consulted on are in the south, west and north-west areas of the city, focusing on the roads around the Alcester Road, Bristol Street, Harborne Road and Soho Road corridors, within a 20-minute cycling time of the city centre.

In addition to changes to main roads to provide fast, direct cycle routes in and out of the city centre, a number of quieter parallel routes will also be created to provide cyclists with alternative route options away from the busier main roads.

These will complement the off-road cycle improvements along the canal towpaths and through the parks.

The changes could have an impact on parking restrictions with the potential loss of some existing on-street car parking to provide safer cycling facilities. There are also new junction layouts being considered to give priority to cyclists, including banning of some turning movements, for example, right turns.

Further consultations will be taking place in relation to cycle route improvements in other parts of the city later in the year.

As Councillor Tahir Ali, Cabinet Member for Development, Transport and the Economy at Birmingham City Council, explained: “Work has already started on improving canal towpaths and creating green routes, and the highway activity will integrate with these to form a comprehensive network of cycle routes.

Making Birmingham a safer place so more cyclists are encouraged to use their bike for work, education and leisure is a significant challenge.

However, we have a team of transport experts on board, who have worked hard to find appropriate solutions, and it is now time to share their thoughts and gain valuable feedback from the people of Birmingham.”

Detailed information on local plans can be viewed on the dedicated Birmingham Cycle Revolution web page at www.birmingham.gov.uk/bcrconsultation

All the plans will be available to view online (www.birmingham.gov.uk/bcr) and in local public buildings from Monday 7 July. The plans are being shown at a number of consultation events where local businesses and residents can discuss the proposals with members of the Birmingham Cycle Revolution Team. Feedback forms can be completed online or at the exhibitions.

Consultation packs and feedback forms will also be available from 7th July to 15th August 2014 at the Museum of The Jewellery Quarter, 75-80 Vyse Street, Hockley, B18 6HA