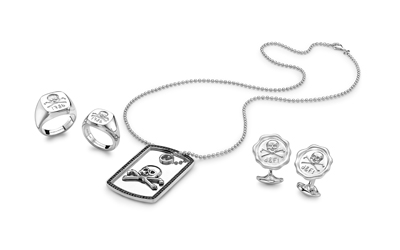 Deakin & Francis® are set to launch a new collection of cufflinks, signet rings, and ID tags in celebration of their 228-year heritage.

The Skull & Cross Bone has featured in Deakin & Francis designs for hundreds of years, as a nod to a distant 16th Century ‘Daykin’ (as Deakin was spelt at that time) who as a naval officer braved a pirate attack at sea.

Arthur Daykin severed the hemp that bound the enemy craft alongside his own using his trusty hatchet and was subsequently granted the Deakin family crest, which depicts a raised and armoured arm rising from a crown, the hand clutching a hatchet.

This crest has been long used as the Deakin & Francis logo as a much-cherished symbol of the family history, but the pirates who presumably plunged from the severed hemp and perished in the brink, have never been forgotten either.

Pirates are immortalised in the world famous pirate design cufflinks, which are as much a part of Deakin & Francis history as the illustrious hatchet-bearing ancestor. 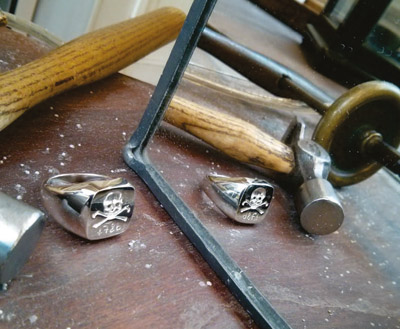 Whilst designing the 1786 collection James Deakin (Head Designer) made an incredible discovery. “One of our workmen had just finished crafting the first 1786 signet ring and called me over to his work bench to see the finished piece.

Next to where he laid the piece was a mirror and the reflection of the signet design caught my eye.

I had to do a double take as I realised that the 1786 reflected as ‘d&f1! We were amazed and I decided to design a pair of matching cufflinks to read ‘d&f1’.

Completing the collection is a sterling silver ID tag with skull and cross bone stamped design and a black spinel border.

Orders are now being taken for pieces from the 1786 Collection, which will launch online on Friday 25th July.