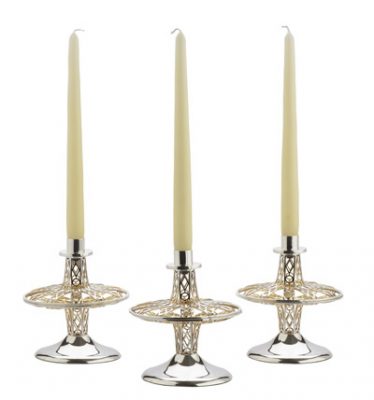 Shona Marsh, one of the UK’s leading designer-silversmiths, has produced a capsule collection of bespoke silver candlesticks designed and made exclusively for Garrard, the world’s oldest jewellers.

“It is a great honour to have been chosen by Garrard to design a special collection for them. My Garrard candlesticks incorporate the company’s ethos of ‘Britishness, Craftsmanship and Heritage’ and, while they make reference to Garrard’s long and distinguished legacy, they are totally contemporary and relevant for 21st century entertaining,” comments Shona.

The three tall candlesticks, designed as a set, have been inspired by the concepts of ‘floating’ and ‘orbs’. From simple rounded bases, the highly polished stems taper elegantly upwards and then fan out into circular orbs of mesh-like-latticework into which the candles are placed.

The design of the latticework, which is sumptuously picked out in 18 carat gold, is based on the recently launched Albemarle Collection.

The collection takes inspiration from the intricate ‘diamond and dot’ pattern featured in the well-known Garrard created ‘Girls of Great Britain and Ireland’ tiara made in 1893 as a gift for Queen Mary and later gifted to her granddaughter Queen Elizabeth II for her wedding in 1947. When the candles are lit, the gilded orbs sparkle luminously and appear to ‘float’ gracefully in space. 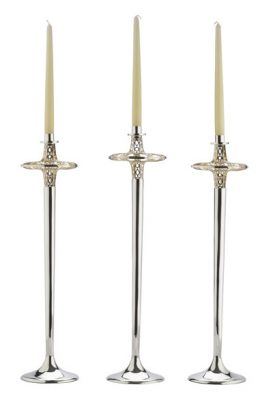 The candlesticks have been conceived to work together as a centrepiece for either a long or a circular table. “While they will make an impact on the table, at the same time they will not dominate or interrupt vision or conversation,” explains Shona. Two of the three candlesticks are an exact pair, while the third is slightly taller in height.

In addition, the candles are multi-functional and have been cleverly designed so that the elements come apart and can be used independently giving a total of four very varied looks. And for a truly magical effect, the candlesticks can also hold both candles and tea-lights simultaneously (the tealight can be placed within the orb while the candle goes on top).

Shona’s exclusive capsule collection of candlesticks will be on sale in Garrard’s flagship London showroom, and selected stores worldwide as from late September 2014.

Shona is based in her workshop located in the creative hub of the Cockpit Arts Centre in London. Alongside her important commission work, including being asked by the City of Birmingham to craft a replica of a cross from Staffordshire Hoard which was subsequently presented to the Pope Benedict XVI, Shona also designs and makes exclusive pieces of exquisitely hand-crafted silver with a particular focus on modern-day tableware.

Shona has received critical acclaim through several industry awards such as the Goldsmiths’ Company Craftsmanship and Designs Awards and she has been fortunate to be involved with the Walpole Crafted Programme since 2013, a mentoring scheme for emerging luxury craft businesses.