Home » Featured » Heritage » Chamberlain Clock is Back Plus, a new Interpretation Panel 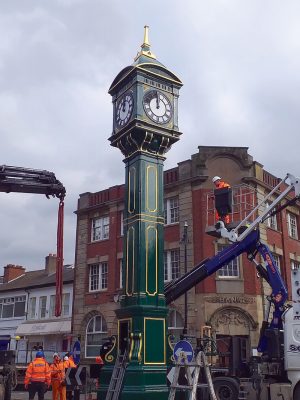 As featured in our January issue No,426, our Chamberlain Clock has been absent for many months but on 21st March it was returned to its rightful place. beautifully restored, and is now ticking away, the beautiful new lights are lighting up the area and the charming chimes are all sending out musical sounds, and both of the original panels have been restored. All finished in a lovely shade of green with gilded embellishments.

The work has been carried out by Smith of Derby under the guidance of JQDT through funds raised by JQBID and JQ Townscape Heritage and the National Lottery Heritage Fund Scheme.

The Hockley Flyer was pleased to provide some additional information for the Interpretation Panel from our database.

Editor’s Note
When studying the few photographs available of the clock taken around WW2, the clock had been stripped of its clock and column lights which were probably lit by gas, and the column itself was painted a very dull colour to help camouflage it from possible bomb attacks and Its chimes would have been silenced for the duration. 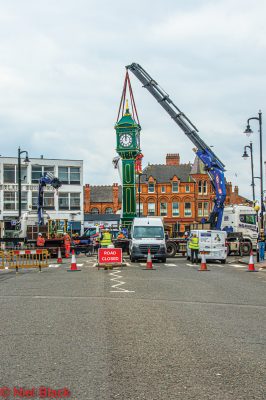 When the Germans decided to raid the inner areas of the UK seeking to destroy the vital war supply chain from our factories, having no Radar, the bombers had to fly in extremely low, following reflections off rivers and canals, whilst risking being destroyed by barrage balloons, and when caught in searchlights – anti-aircraft gunfire.

If a brightly painted, lit up monument, stood proud in the light of their flares – they would have suspected something important nearby, so the clock and column lights were removed.

Why were the bells silenced?
Although the ringing of bells near the coast warned of an invasion, in inland areas it meant a ‘gas attack’ and we all had to put on gas masks immediately. This meant all church bells, school bells, chiming clocks etc were silenced by law to prevent possible panic amongst the population.