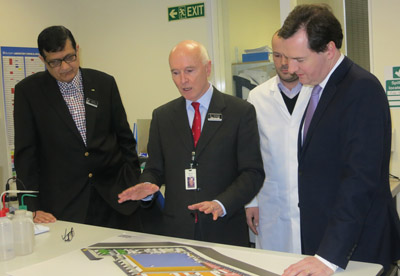 The Birmingham Assay office was first in line when the Chancellor, the Right Honourable George Osborne MP visited Birmingham on Friday.

A tour of the existing Victorian building revealed the wide variety of work carried out at The Birmingham Assay Office, not just in hallmarking but also in precious metal analysis and product safety testing.

Chief Executive Michael Allchin introduced the Chancellor to many of the staff during a tour of the hallmarking area and they demonstrated their skills in assaying, traditional hand marking, and the latest laser marking. 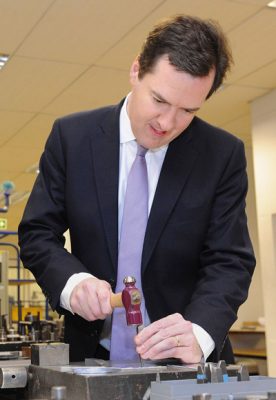 Birmingham is the largest of the four UK assay offices and in recent years has diversified to offer a wide variety of services to the jewellery industry and other closely linked sectors.

The Chancellor also visited the analytical laboratory where he saw a range of methods being applied, from scrap gold being melted to elemental analysis using highly sophisticated technology, all of which he seemed to find very interesting. 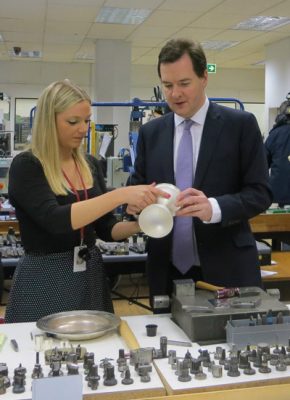 Michael explained that while hallmarking volumes are falling, due to ever increasing precious metal prices, new activities, which also include gem certification and jewellery valuations, are growing strongly but are constrained by the inflexibility and lack of space in the current building.

The business has to move in order to protect jobs, to survive and to continue to grow.

The Enterprise Zone brought benefits which made the new site on the opposite side of the Jewellery Quarter attractive and, along with a grant from the European Regional Development Fund, made building a new Assay Office in Birmingham’s Jewellery Quarter a viable option.

Detailed designs are in their advanced stages and it is expected that building will begin in Summer 2013.

The Chancellor and his team were very appreciative of the time given to them and left The Birmingham Assay Office with a much better understanding of one of Birmingham’s oldest institutions and the positive plans it has for the future.