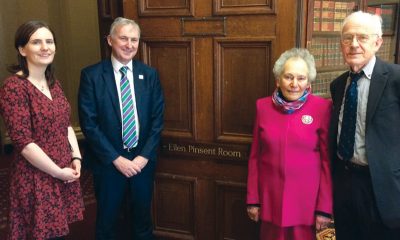 A portrait of Birmingham’s first and only female leader is to be commissioned to celebrate her outstanding contribution to civic life, it was announced on 8 March 2021.

During her long career in local government, she consistently campaigned on behalf of the vulnerable, the poor and those who needed extra help in life.
The artwork will hang in the Ellen Pinsent Room in the Council House, which was renamed on International Women’s Day 2019 after the city’s first female councillor as a room dedicated to celebrating women’s achievements.

Alderman Stewart’s portrait will join the 30 portraits in this room – which she and Dame Ellen Pinsent’s great-grandson, Randall Keynes opened – of the women featured in Once Upon A Time in Birmingham: Women Who Dared to Dream.

“We’re working with her family on this commission to help capture and commemorate her achievements – and it’s fitting we are announcing this on International Women’s Day.

“The Ellen Pinsent Room is a place where the city’s notable women and their achievements can be rightly recognised – and we look forward to her portrait taking its place there.”