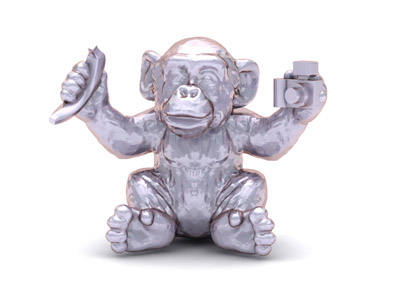 Weston Beamor (WB), the long-established casting house, rapid prototyping and bespoke jewellery making company, has a unique proposition for visitors to The Jewellery Show 2013 where it will be exhibiting on Stand P44, Q45 in Hall 17.

The company will be giving away extremely cute, three-dimensional resin chimpanzees, to those who visit its stand at the show.

However if you want to own a 1” high bundle of fun, there are conditions attached. In order to receive one of these marvellous, mini monkeys (each of which comes with its own care instructions booklet!) you must be prepared not only to ‘Like’ WB on the company’s newly created Facebook page, but must also be prepared to take a photograph of your new simian friend and upload to the Weston Beamor Facebook page.

“We have created a special folder where we will house pictures of the chimps so that people can vote for their favourite. The competition will run until September, 2013 when the winners will be announced in September at International Jewellery London,” explains Glen Day, WB’s Head of Business Development.

A cheeky chimp has already been photographed at no lesser venue than the Houses of Parliament where he managed to sneak through the police checks to join in The BJA’s 125th Anniversary party held there in November and Weston Beamor expects to see many more little monkeys getting up to mischief not only at The NEC once the show begins but around the world.

There is of course a serious purpose behind all this monkeying about.

The resin chimps were created using WB’s very latest high-tech equipment including a sophisticated 3D scanner which will be making its first appearance on the firm’s stand at The Jewellery Show. Having scanned an original and much larger chimp, the scan was then turned into a CAD file and manipulated in the software before being turned into perfect, but smaller, resin replicas using WB’s sophisticated rapid prototyping equipment.

“The monkeys are our way of saying to our customers – many of whom as top jewellery designers are extremely creative people – look what we can do and just imagine what you can do with our latest technology. We hope everyone has fun with the chimps and I feel sure that we can look forward to some innovative and fun pictures,” says Day.