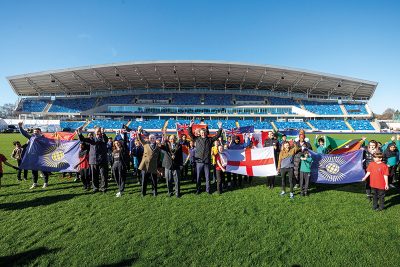 Commonwealth Day is an annual celebration observed by people all over the Commonwealth in Africa, Asia, the Caribbean and Americas, the Pacific and Europe. But more specifically, it demonstrates another significant landmark in the Games year as the Proud Host City of Birmingham enters the final lap of preparations ahead of the Commonwealth Games in July and August.

To gear up for the Games this summer and to mark Commonwealth Day, the council hosted an event on Monday at Perry Barr’s Alexander Stadium; our international-standard athletics venue located in the north-west of the city that will host all the Games athletics events as well as the spectacular opening and closing ceremonies.

The event hosted 72 children from nine schools from across the city and the youngsters got to immerse themselves in the type of celebrations we’ll be seeing this summer, which is now only a touching distance away.
They were joined by a range of guests, including athletes from Birchfield Harriers Athletics Club (one of our highly-regarded tenants at the Stadium), Team England track and field team leader Kelly Sotherton and para sprinter Katrina Hart – as well triple jump legends Ashia Hansen and Nathan Douglas.

Representatives were also on hand from Birmingham 2022 and our Stadium project co-funders at Greater Birmingham and Solihull Local Enterprise Partnership, in addition to council officers that have been working hard to prepare the stage for our Commonwealth visitors and Cllr Muhammad Afzal – the Lord Mayor of Birmingham.

he children were given the privilege of testing out the newly laid running track as the finishing touches are made to the Stadium and also took part in a special walk, carrying a range of flags of competing nations and territories as well as the Commonwealth flag. It really did get everyone thinking about how amazing the opening ceremony will be for the Games in just over four months’ time.
As the Host City of the Games, we’re all extremely excited to put Birmingham and the West Midlands’ talent, creativity, ambition, heritage, and diversity on a global stage and demonstrate why Birmingham is the commonwealth city.

Locally people know our strengths, but it is always worth taking a little time to reflect on them as we can often take them for granted.

Whether it’s our diverse range of culture; having more canals than Venice, the bold; broad; Brummie accent (love it or hate it), or the incredible Michelin star cuisines, Birmingham has a lot to offer.
The city welcomes major events and visitors like no other and this summer’s Games will help us to keep ‘on track’ with this accolade. With undisputable connectivity, located in the centre of the UK, more than 36,000 bed spaces available for delegates and an incredible range of world-class venues and state-of-the-art facilities, Birmingham continues to be the city of choice for both national and international conferences and events.
We’re the youngest city in Europe with almost 40 per cent of the population being made up of under 25’s whose voices are being heard and modernisation has been implemented across the city. We have over 50 festivals across the city every year with people travelling far and wide to attend.

We’re the beating heart of the UK that has a rich diversity, and the confidence to express it.

Our food scene has seen the city transform itself into the ultimate dining destination with a variety of delights from award-winning street food to Birmingham also having the most Michelin star restaurants in the UK outside of London. We’re one of the leading shopping destinations and are home to the Jewellery Quarter, from where an incredible 40 per cent of all UK jewellery originates.
Our colourful arts scene includes the stunning Symphony Hall, with its resident orchestra the CBSO (City of Birmingham Symphony Orchestra). The region’s exciting history has also left visitors with several exciting attractions to discover, including Cadbury World, the National Trust Back to Backs and the Black Country Living Museum. Birmingham Hippodrome is the UK’s busiest theatre with over 520,000 visitors each year and our neighbouring city, Coventry, was also the City of Culture in 2021.More people than ever are talking about Brum, and we want our story to be heard and our people to not be shy when it comes to being BOLD.
The city has seen some incredible changes over the recent years, including the grand unveiling of Europe’s largest library and the £600 million redevelopment of New Street Station, with in excess of a further £700 million being invested into the ongoing regeneration of Perry Barr, the area where the Alexander Stadium is located, too.

As we look ahead to the Common-wealth Games, we want to keep moving forward with the amazing changes and improvements that we’ve already seen here in Birmingham, ensuring they reach every neighbourhood and every community.

The Games are a way to show off the city to the world, and in passing the milestone of Commonwealth Day in the year we host the Commonwealth Games, we now really are within touching distance of the event that will prove to be a launchpad for a Golden Decade for us.

In many ways it has been a long journey, in others, it has flown by – but we are almost there.
Be Bold, Be Birmingham.