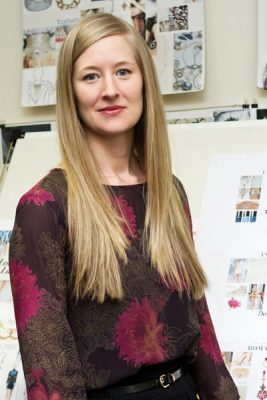 Naomi Newton Sherlock has been promoted to the role of ‘Creative Director by WB The Creative Jewellery Group, one of the UK’s largest jewellery companies. She will take responsibility for overseeing creative activities for all the Domino brands and will bring added creative knowledge to its board.

Sherlock who has been with the Group for five years, firstly as a jewellery designer and then as Head of New Product Development and National Accounts, is well qualified for the role with a number of prestigious design awards, including several from The Goldsmiths’ Company and a Lonmin Design Award for platinum, under her belt.

A graduate of Cardiff University where she achieved a BA Hons in Italian and Japanese, Sherlock then studied at The School of Jewellery in Birmingham before going on to work, on the bench, for some of the most exacting names in the industry.

Past employers include Cellini in Cambridge, James Newman in Birmingham and David Marshall in London – a career path which has given her unique experience in creating highly-contemporary, modernist jewellery as well as more traditional, luxury gem-set designs.

“Naomi has a broad range of skills. Not only is she a terrific designer with a wonderful eye, she is also a highly competent technician who understands how jewellery is made. It is she who has been at the heart of creating many of Domino’s most successful recent collections – such as Rosabella, our highly successful platinum bridal ranges and Trends and Fashions – and it is she who has built and successfully managed our thriving nine-strong new product development team. She has great creative and indeed commercial vision and I feel sure, as a Director, she will have much to bring to the Domino board and to the further development of the company,” says managing director, Andrew Morton.

“I’m delighted and excited in equal measure. Since I joined five years ago the company has changed out of all recognition and it has been being tremendous to play a part in its on-going expansion.

Having a seat on the board will give me the opportunity to contribute even more directly to its future development and I am looking forward to working with Andrew and my fellow directors to grow the reputation of Domino as a truly creative jewellery producer, both at home and abroad,” Sherlock commented.