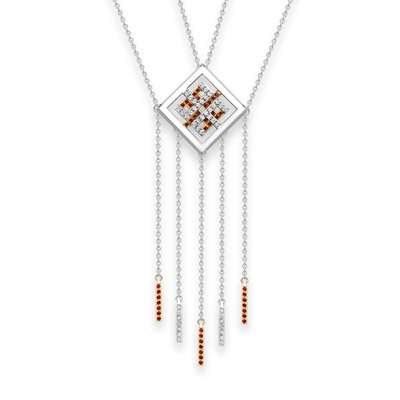 WB The Creative Jewellery Group was proud to be part of ‘Birmingham Made Me’ a two-week Design Expo which took place at the City’s Millennium Point from 6th – 21st June, 2013.

The event, which was sponsored by Birmingham City Council, with support from Birmingham City University, Business Birmingham and Millennium Point, features a showcase of products from some 70 top Midland manufacturers with many iconic companies such as Aga Cookers, Aston Martin cars, Dunlop tyres, Acme Whistles and WB The Creative Jewellery Group, all taking part.

The Group used the Expo which is open to the public and places particular emphasis on student involvement, to showcase designs from two of its companies – Domino and Weston Beamor.

The jewels are perfect example of the Group’s manufacturing excellence demonstrating, as they do, many of the modern and traditional jewellery-making skills on which it has built its reputation.

The Expo is accompanied by an on-going, world-class Seminar programme as well as featuring daily seminars, workshops and competitions. Domino director Naomi Newton-Sherlock, who heads up the company’s nine-strong design team, was one of the distinguished line-up of speakers in the Seminar programme.

Newton-Sherlock took as her topic ‘Heritage – a unique feature of the WB value proposition’ in which she looked back over WB The Creative Jewellery Group’s sixty years of production in the heart of Birmingham’s historic Jewellery Quarter and how its history impacts upon the way in which this expanding, family-owned company is managed and operates today.

“We are proud to have been chosen to take part in this very worthwhile event. It used to be said in the City’s heyday, if something couldn’t be made in Birmingham it couldn’t be made at all.

Today, despite moves to overseas production by many UK firms, I’m pleased to say that more and more businesses, like our own, are now finding that making things in Birmingham still makes strong commercial sense and has the added bonus of backing Britain,” Newton-Sherlock commented.