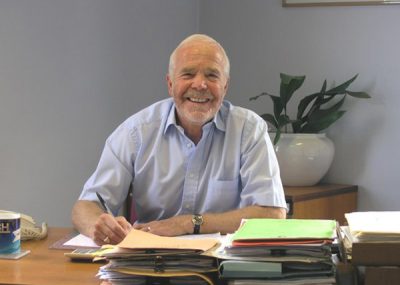 Our Company Chairman Desmond Walsh has just retired after 64 happy years at the helm of H S Walsh and Sons Limited. He will now spend more of his time on the Properties Company, ably supported by his two daughters Lisa and Sophie who have great plans for the site at Beckenham now that the Trading Company has relocated to Biggin Hill.

To mark this special occasion the Directors took off in a Navajo 8 seater plane straight from our premises at Biggin Hill Airport for an exhilarating flight to Honfleur in Normandy.

They had a wander around this picturesque fishing village which boasts a 15 century wooden church and an old fort and then enjoyed a delicious fish lunch in a harbour-side restaurant. It was certainly a day to remember!

Desmond has dedicated much of his life to the success of the company and from its humble beginnings in the front room of his father’s house in Beckenham in 1947 it has become a very significant player in the jewellery and horological world, with its Head Office now operating from Biggin Hill and its two branches in Hatton Garden, London and the Jewellery Quarter in Birmingham.

Whilst steering the business he continued to play rugby until he was 47, then he took up coaching the juniors and developing Beckenham Rugby Club from a few members to hundreds of happy youngsters (and their parents) today.

He also loves golf and swimming and was still ski-ing twice a year until very recently, at the age of 75! He is obviously the lynch pin of his extensive family and really enjoys their regular get-togethers, putting lots of effort into being a Grandad to four lively youngsters.

Desmond will be keeping in touch with Head Office and both branches from time to time and we wish him well for a long, healthy, and happy retirement.