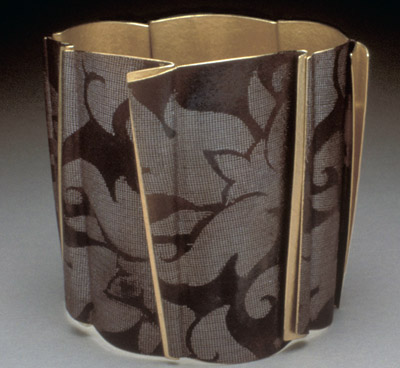 Jacqueline Mina’s highly original fused and textured jewellery is the subject of a fascinating exhibition at Goldsmiths’ Hall, which opens to the public on Monday January 31 until Saturday February 26, 2011 – admission free.

One of the country’s foremost artist jewellers, Jacqueline has long enjoyed a reputation for her technical brilliance and unorthodox approach to traditional goldsmithing techniques resulting in her sensuous and understated jewellery.

Celebrating Jacqueline’s achievements, the exhibition focuses on highlights of 30 years of her exquisite studio work and unites, for the first time, significant loans from public and private collectors, alongside a vibrant collection of newly created works.

Amanda Game, a Freelance Curator and Contemporary Jewellery expert, who has assisted in the curating of the exhibition said: “Works have been carefully selected to show Jacqueline’s uniquely free and innovative approach to precious materials.

Jacqueline has an authoritative use of traditional goldsmithing techniques allied to a strong artistic curiosity which result in works which have a rare aesthetic presence in the field of contemporary gold jewellery.”

Form and texture are the two main preoccupations of Jacqueline’s art, and her jewels are visually exciting not just for their shapes but for the rich variety of their surface textures.

Throughout her career Jacqueline has constantly experimented with metals, and continues to do so, technically challenging them to new potentials. Rising to and over-coming challenges has always been an important part of her work, and she maintains that to be truly creative an open and investigative mind is vital.

Her jewellery is the unique result of a dialogue between the metal and her own creative soul – hence the title of the exhibition ‘Dialogues in Gold’. She rarely sketches an idea in advance and works directly with the metal before creating the final design.

One of the earliest pieces in the exhibition is a necklace formed from loosely articulated graduated oval platinum forms sprinkled with gold dust which was then fused to the surface and compressed through steel rolling mills.

The necklace was only the second piece that Jacqueline had ever made in platinum and it was while making it that she discovered that platinum was capable of great delicacy and preciousness.

Another necklace reveals a different innovative technique – small rosettes of wiggly platinum wire were soldered together using fine gold, pressed into prepared forms and then placed into a platinum frame. The result is a jewel that is both striking and simultaneously delicate with the strands of platinum resembling fine filigree work.

An inspirational visit to the Fortuny Museum in Venice in 1993, coinciding with the chance discovery of platinum gauze, led to an exciting range of work where the metal resembles brocaded textures.

This was achieved by a technique she calls fusion inlay and involves fusing the platinum gauze inlay onto gold. This feature could be heightened further by oxidising the gold to produce muted gradations of colour and a haphazard random surface resembling antique fabric. A number of pieces on show illustrate this brocade technique that is so synonymous with Jacqueline’s jewellery.

‘Striptwist’ is another skill regularly used by Jacqueline. An archaic method of making a tube by twisting a ribbon of gold along its length until the twist collapses into tube form with diagonal striations. Jacqueline has adapted and taken this technique to new heights and one of her most recent pieces, a stunning bracelet in gold which combines impressed metal and strip twist to great effect.

While Jacqueline’s two favoured metals are gold and platinum, she has also worked in titanium. Her first experiments with this non precious metal were in 1981 when she was teaching at the Royal College of Art.

New materials were all the rage, but while most artists used titanium as a flat plane, Jacqueline took the challenge of cajoling it into 3-D shapes. The early experiments with titanium proved influential and useful in developing her later gold work. She recently returned to titanium and a number of jewels – most notably brooches are made of textured and coloured titanium combined with platinum and gold.

Inspiration for Jacqueline’s jewellery does not come from any one source – it is invariably fuelled by nature, or for example the intense feeling of marvel she experienced when she viewed the Cycladic sculptures in the Goulandris Museum in Athens. Jewellery produced after her Cylcladic experience is embodied with an essence of these ancient sculptures – most notable being a gold brooch, its rounded forms making a passing reference to the ancient sculptures.

Over the past 30 years Jacqueline has remained true to herself and her art. She has never produced jewellery commercially, and each piece and every component of a jewel she makes herself – she even sets each stone – and the back of a piece and the fitments are as important as the front. Jacqueline’s is a low-tech workshop. The only concessions to technology are a wire drawing machine and a pendant drill – everything else is made by hand using traditional goldsmithing techniques.

Throughout her career, Jacqueline has always taught as well as producing her own body of work. Until 1994 she was a lecturer at the Royal College, in addition to teaching at colleges around the country. Some of her past students have become distinguished jewellers in their own right, notably the Italian jeweller Giovanni Corvaja and British jewellers Jane Adam and Catherine Martin, all of whom openly express their gratitude for her guidance and tutelage early in their careers.

Awards and accolades have been prolific over the past 30 years and a highlight of such a remarkable career was undoubtedly being chosen as winner of the 2000 Jerwood Prize for Applied Arts – Jewellery. Not surprisingly Jacqueline’s jewellery can be found in private collections worldwide and in major museums ranging from the Victoria & Albert Museum in London to the Museum of Art and Design in New York.