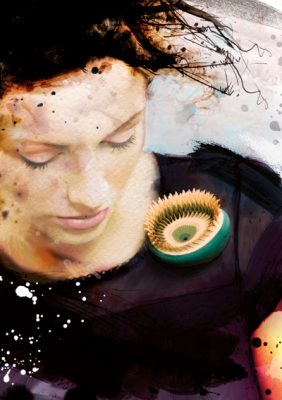 To mark the start of the festival’s new vision, Birmingham City University graduate Li-Chu Wu has been chosen as this year’s profile designer-maker with her skilled paper jewellery.

Brilliantly Birmingham was born out of Birmingham’s historic Jewellery Quarter, which employs around 400 people and is home to more than 80 contemporary designer-makers; in addition to hundreds of historic firms.

Now an international contemporary festival, Brilliantly Birmingham returns on 27th November for its eleventh year to celebrate the city’s rich heritage and renowned reputation for jewellery design and production.

Running until 9th January 2011, the festival will see an array of jewellery talent exhibited across the city including the newly reopened Mac at Cannon Hill Park and venues in the Jewellery Quarter.

Growing from an informal group of local designer-makers to a prestigious festival regularly attracting esteemed international designers, this year’s event focuses on the journey of designer-makers and the festival audience. Through a range of exhibitions, seminars and workshops, audiences will be taken on a journey of jewellery-making, from initial concept to finished product.

Birmingham City Council Cabinet Member for Leisure, Sport and Culture, Councillor Martin Mullaney said: “Brilliantly Birmingham is renowned for showcasing some of the region’s best creative talent and we are delighted to be supporting new and established contemporary jewellery designers. The city has a rich history of jewellery design and production, particularly in the Jewellery Quarter, where we also have the award-winning Museum of the Jewellery Quarter.

Last year, Brilliantly Birmingham saw over 130,000 visitors and helped profile 170 designer makers across 15 of the city’s key venues. Moving into its eleventh year, we are proud to be supporting the event as it is testament to the heritage and innovation that lies at the fingertips of the city’s talented designers and producers.”

This year’s chosen profile designer is Birmingham City University Graduate Li-Chu Wu, who impressed judges with the subtle movement and tactile qualities of her paper jewellery. Originally from Taipei, Taiwan, Li-Chu’s work was chosen from seven candidates to front the campaign for Brilliantly Birmingham 2010.

Using a mix of metalsmithing techniques and new technologies, Li-Chu’s designs consists of a series of paper, one-off, wearable pieces and body adornments.

Graduate designer-maker Li-Chu Wu said: “I’m absolutely delighted to have been chosen as the profile designer and have my work shown in such an impressive arena. I chose paper as my main material because

I believe it not only shows the value of the material itself but also recreates the link between the material and its original source in the natural environment. I intend to continue letting paper extend its value through my work.”

In addition to the events taking place across the city centre and Jewellery Quarter, Brilliantly Birmingham will also see the fifth annual FLUX. The exhibition of new and emerging designer-makers will be situated at the new gallery space at Mac throughout the festival, providing a platform for new designers to display and sell their work.