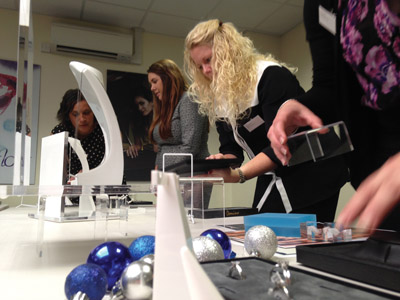 Some twenty retailers from throughout the UK visited Domino’s headquarters in Birmingham recently for a day-long seminar on visual merchandising for Christmas.

The presenter was Alan Springall of the display, design and production consultancy Springall Allen Partnership. Springall, who trained at Selfridges, numbers many household name companies amongst his clients and is also head tutor for distance learning at the British Display Society (BDS).

He told his audience that successful visual merchandising is one way in which retailers can ‘steal a march’ on their competitors over the festive season and said that their displays should be used to reinforce people’s expectations of their business and to arrest their attention.

Speaking about Christmas displays in particular he commented: “Don’t become too designer-led unless you only wish to attract the more hip and trendy customer. The general public tends to prefer a warm, cosy, traditional approach to Christmas. That doesn’t mean though that you can’t give those traditional images a fresh twist.”

Springall had created three easy-to-replicate displays to demonstrate how such a twist can be achieved. One incorporated battery operated ‘candles’ – the flickering of which, he said, is an excellent way to catch the eye of passers-by. Another used natural twigs sprayed white to create an inexpensive and effective Christmas scene, whilst in the third he featured ‘flying’ origami birds suspended on transparent wire to great effect. 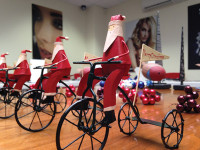 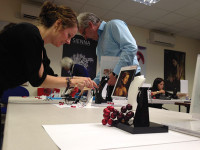 Participants were also invited to put theory into practice. Using props and jewellery supplied by Domino they were asked to create displays using particular techniques previously explained to them by Springall.

Delegates were also treated to a conducted tour of Domino’s extensive manufacturing facility where they were able to view the entire jewellery production process from initial design concept, through 3D printing and lost-wax casting to setting and final polishing.

Mark and Alison Welch of M G Welch Jewellers of Taunton were amongst those participating. “It was very useful, especially the practical session where we tried out a layout combining symmetrical balance and radiation techniques which we hadn’t tried before,” Mark Welch commented afterwards. 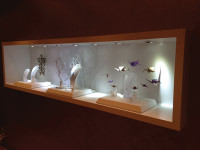 Jason Rigby and Sophie Marshall of Rigby Jewellers in Chester also enjoyed the hands-on demonstration and said that they had found Springall’s feedback and comments on their practical work to be very useful.

Rowenna Mahoney from JRC Jewellery in South Wales also found plenty to interest her. “You get so comfortable doing what you do that you probably don’t change as much as you should. Coming to something like this gives you inspiration and the confidence to be a bit more adventurous,” she said.

Speaking after the event Domino’s chairman Patrick Fuller said: “We were delighted that so many of our customers took us up on the invitation to attend this event and hope very much that it will have provided them with some good ideas which they can take back and use to their advantage.”