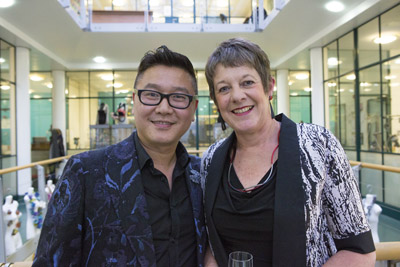 To celebrate his 10th anniversary as a jewellery designer, Fei Liu auctioned four pieces of jewellery and donated the proceeds to Birmingham’s Childrens Hospital, and showcased his bespoke pieces for the first time to the UK market together with the two most popular collections: Cascade and Serenity.

The event was organized in collaboration with the School of Jewellery, which marked its 125th birthday and it was held at the premises of the school on Friday October 12th. 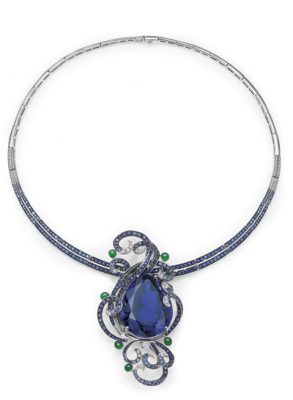 The acclaimed jewellery designer showcased his bespoke pieces, and among the couture designs were his award winning platinum Kingfisher earrings and tanzanite and diamond necklace which was shown for the first time in the UK.

These platinum diamond and turquoise earrings show the antique Kingfisher units to the best advantage whilst preserving them in the original form. The earrings were awarded with the Lonmin Design Innovation Award in 2011.

The Tanzanite necklace contains three large tanzanites whose collective weight is over a hundred carats and over 14 carats of white diamonds set into 18K white gold. 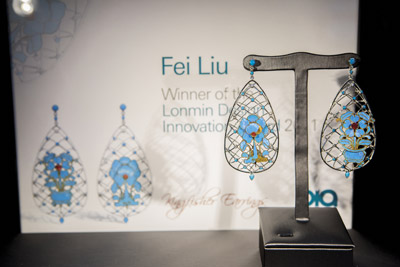 Gaynor Andrews, the Head of School of Jewellery, opened the event speaking about Fei’s time while he was a student at the school and their continuing collaboration.

“Fei is an excellent ambassador for the School of Jewellery and was awarded the title of Alumni of the Year for Birmingham City University at our graduation ceremony in 2012,” said Gaynor.

“He continues to employ our graduates, and from his own volition believes that the School of Jewellery has been a huge influence on the success of his career over the past sixteen years,” she added.

“I was telling my teacher Maria Hanson, when she had an exhibition in the school that one day I want to have my own show here. I have waited sixteen years to showcase my collection.

I would like to thank Gaynor and the School of Jewellery for this opportunity. Without the education I received from this school, I would never be able to be where I am today,” Fei Liu said.