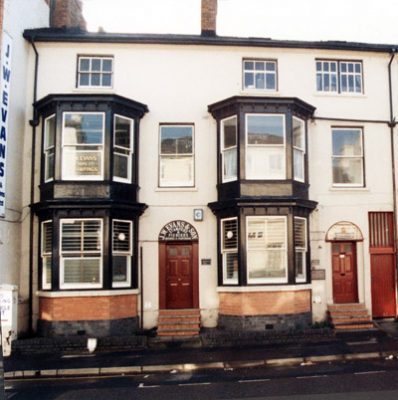 In 2008 English Heritage stepped in and acquired JW Evans – an extraordinary piece of industrial heritage – for the nation. A family silverware factory founded in 1881 in the heart of Birmingham’s historic Jewellery Quarter, Evans faced dereliction or sale to a developer who could have cleared its contents and erased more than 100 years of history.

After halting its decline, English Heritage is now opening the doors of this hidden treasure to the public for guided tours between I June and 31 October, 2011.

JW Evans, and other silver workshops like it, produced wares which graced the dining tables of the British Empire.

The ingenuity of these businesses made Birmingham famous throughout the world. Evans is now one of the last remaining workshops and survives complete with all its stamps, dies, pattern books, inventories, account books and examples of the silverware made there in situ.

The premises are a rabbit warren of rooms crowding behind a modest terrace of four 1830s houses. When English Heritage arrived, the building was in very poor condition, with rain pouring in through the roofs and some areas close to collapse.

The external shell of the building has been fully repaired, with work completed to the slate roofs, brickwork and windows.

In preserving the interior, English Heritage’s guiding principle has been one of stemming the tide of decay rather than full restoration. As far as possible, everything has been left untouched and in its original location throughout the whole of the repair programme. The dust is still thick and the factory is redolent with the atmosphere of its 130 year history.

English Heritage Conservator, Beth Stanley, said: “When we first walked into the building it was like entering a lost world. Everything was still here — workshops packed with machinery, tools and equipment piled up on every workbench, every wall covered with racks of steel dies, the stock rooms full of parts ready for assembly, the office with the last orders taken still pinned up on the wall. Even the pictures of football teams over the employees’ workbenches were intact.

“We recognised that this was something quite unique and decided it should be preserved, without touching a thing. This meant the adoption of a new and radical approach to the conservation work, never before undertaken on this scale. All the building contents were protected and stayed exactly where they were — even the dust.

Crumbling plaster and flaking paint were consolidated, not renewed. We’ve even kept the old lights, threading new wiring along the rusty conduits. The end result is wonderful — it looks just like it did when we first arrived.”

Until English Heritage stepped in, in 2008, Tony Evans, grandson of the firm’s founder, had done all he could to keep the business going. In its heyday before the First World War, over 40 people were employed at JW Evans.

Business was still strong through the Silver Jubilee year of 1977, but went into decline as silverware for the table fell out of fashion, and prices were undercut by production in South East Asia. By 2005, when most of the workforce had had to leave and only a few orders were still undertaken, Mr Evans decided it was time to sell up and retire.

Mr Evans said: “I was very happy to be able to hand the keys for the factory to English Heritage. This was the only way that the building and its contents could be kept together. Now, I am working with the conservators, explaining how the business and workshop functioned. I am also training the volunteer tour guides and very much looking forward to taking some of the tours myself.”

Dr Simon Thurley, Chief Executive of English Heritage, said: “The loss of JW Evans would have been a loss not just to Birmingham but to the world. We’re delighted to have saved it and now hope to pass it on to a trust who can keep it open for present and future generations to enjoy.

We are deeply grateful to Tony Evans and the many former employees and their descendants who have shared their knowledge with us over the last three years. We are also grateful for the support and enthusiasm we have had from the community of the Birmingham Jewellery Quarter.”

JW Evans is at 54-57 Albion Street, Birmingham. Tours are only available on a limited number of days throughout the summer season. The size of the property means that these are limited to just 10 people per tour. These tours must be booked in advance. £7.50 for EH Members and non-members. No children under 12. Please call 0870 333 1181.