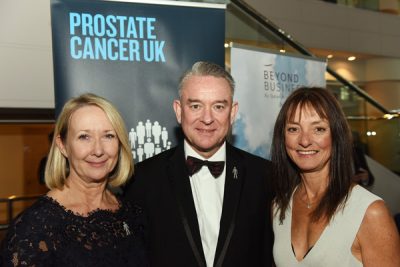 Prostate Cancer UK is the latest charity to be supported by the Eventmasters Foundation. The Foundation based in Ludgate Hill, St Paul’s Square, was formed in 2018 to ‘formalise’ the efforts that the corporate hospitality specialist has been making for the last 30 years in supporting numerous good causes.

Eventmasters has committed to donating a minimum four figure sum to each of its four chosen charities from the proceeds of fund-raising activities and silent auctions at its own events. These efforts then culminate every December at the annual Midlands Sportsman’s Luncheon where a cheque presentation is held.

Eventmasters Managing Director Denise Sheasby, a former nurse herself, said: “Prostate cancer is a dreadful disease and claims many lives that if diagnosed earlier could have been saved. We want to work with the charity not only to raise funds but also to help raise awareness. Prostate Cancer UK has also been selected by Greater Birmingham Chambers of Commerce as their charity of the year and, as Chamber partners and members, we were delighted to help raise funds at the Chambers’ Annual Dinner via our sister company, ww.silentauctionevents.com; A big thank you to all of the guests in attendance on the night that helped raise in excess of £3,000.00 from the Silent Auction.”

Tracey Pritchard, Executive Director of Engagement at Prostate Cancer UK said: “We would like to thank the Eventmasters Foundation for choosing Prostate Cancer UK as their charity of the year and for recognising the vital support we need to stop prostate cancer being a killer. Prostate cancer is the biggest cancer killer in men, with one man dying every 45 minutes from the disease – a shocking statistic that cannot be ignored. The money raised by the Eventmasters Foundation will help us fund vital research to improve diagnosis, treatment and prevention of the disease as well as helping men and their families affected by prostate cancer. This support is invaluable and for this we are extremely grateful.”

Eventmasters, established in 1985, has become one of the UK’s leading official corporate hospitality specialists, providing experiences and VIP packages around top sporting and cultural events including the likes of Royal Ascot, Cheltenham, Premier League football, tennis tournaments and much else besides.

Find out more information about Prostate Cancer UK at: https://prostatecanceruk.org/