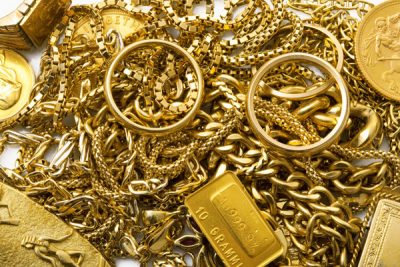 A third of ‘gold’ jewellery sold online in the UK is suspected as fake, warns the British Hallmarking Council .

A third of ‘gold’ jewellery being sold online is suspected to be un-hallmarked and therefore may be fake, raising concerns that UK consumers are being duped by internet traders, according to data released on 1st November 2019 from the British Hallmarking Council (the UK’s hallmarking body) and the Goldsmiths’ Company Assay Office.

A 10-day internet sweep by WRi Group in partnership with INCOPRO, on behalf of the British Hallmarking Council and Goldsmiths’ Company Assay Office, revealed that 36% (6,377 from a total of 17,657) of ‘gold’ jewellery listings on sites such as Amazon and Preloved had not been advertised as hallmarked. Of those listings 24% (4,278) of all items were suspected as fake and therefore being sold illegally. eBay sellers alone accounted for over half (56%) of all suspect items of ‘gold’ jewellery being sold online, where there was no mention of a hallmark, between 21 March and 1 April 2019.

It is illegal to sell anything in the UK made from a precious metal (silver, gold, platinum, and palladium) over a certain weight without a hallmark – a stamp of quality that protects the consumer by confirming that what they are buying is made from real precious metal. The research suggests around 150,000 items of fake ‘gold’ jewellery could be listed for sale in the UK each year, through online marketplaces such as eBay and Amazon.

Noel Hunter, Chairman of the British Hallmarking Council, says: “The UK Hallmarking Act (1973) was put in place to protect consumers and retail jewellers from counterfeits, but the application of the legislation to online trading activity remains untested. And we have seen little appetite from the internet giants to step up enforcement or adequately protect consumers.”

Our internet sweep highlights just a fraction of the infringements made by online sellers of ‘precious metal jewellery’ in the UK today. A duty of enforcement currently rests with local Trading Standards departments, who have suffered a 50% cut in their resources over the last five years. Adequate powers are necessary to deal with internet trade.”

Robert Organ, Deputy Warden for the Goldsmiths’ Company Assay Office, agrees: “We are joining the British Hallmarking Council in calling on the Government to work with us and the other Assay Offices in the UK, to develop a robust enforcement strategy that protects consumers and businesses from internet based, unfair trading practices. This must include a review of the current Hallmarking Act to see if it could be extended to cover internet trade.

We are also asking the Government to work with Amazon and eBay to increase hallmarking information on precious metal jewellery listings, raising consumer and seller awareness about hallmarking and the law.”

Partly to blame for this situation is cuts to Trading Standards budgets and inadequate legal powers, which are hurting consumers and retail jewellers, and the British Hallmarking Council and Goldsmiths’ Company Assay Office call on the Government and internet giants to protect UK consumers by enforcing online trade to comply with regulations.

Consumers are advised to always check for a hallmark, “It’s your guarantee,” says Organ. He says consumers should always ask an online seller, before they buy, if an item has been hallmarked. Anyone who believes they have been sold fake precious metal items should speak
to Citizens Advice, who can provide general information on hallmarking or give advice to help resolve a dispute.