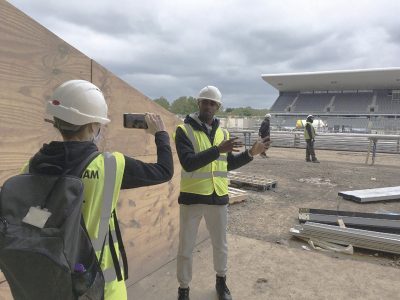 Team GB and Team England triple jumper Nathan Douglas is to chart progress made during the final 12 months of the Alexander Stadium’s redevelopment in a series of vlogs for Birmingham City Council.

The eight-time British champion, who trains at the stadium and its High-Performance Centre, has competed at the Perry Barr venue many times during his long career, and was keen to tell the story of the site’s redevelopment ahead of the Birmingham 2022 Commonwealth Games.

Nathan said: “The revamped Alexander Stadium will be an amazing facility. I wanted to find a way that I could tell the story of how things are improving to as wide an audience as possible. Social media is a great way to engage with people, whether they have been athletics fans for years, are interested in the upcoming Commonwealth Games, live in Birmingham or been to the stadium in the past.

“Over the coming months, I’ll be taking a look behind the scenes and speaking to people who have worked or performed at the venue. I hope the buzz and excitement of the stadium redevelopment and upcoming Games is something I can get across to people who see the vlogs.”

As well as his triple jumping and an enthusiasm to enter the world of vlogging, Nathan has always had a passion for performance psychology which led him to achieve a BSc in Sport and Exercise Science (Psychology) from Loughborough University.

Nathan is a certified Peak Performance and Resilience Coach, NLP Practitioner and has been trained in Mindfulness Based Cognitive Therapy at Oxford. Nathan combines his expertise alongside the team at 7Futures to help their corporate clients to build a culture of wellbeing and high performance.

Cllr Ian Ward, Leader of venue owner Birmingham City Council, said: “It’s great to have such a well-respected athlete as Nathan on board for this assignment – I know he is excited by the bold ambition we have for the Alexander Stadium as the centrepiece of leisure, health and wellbeing activity in a regenerated Perry Barr. These videos will help inform and excite people in a fun way about the fantastic progress that has been made over the last 12 months on the project and what is going on ahead of the Commonwealth Games.”