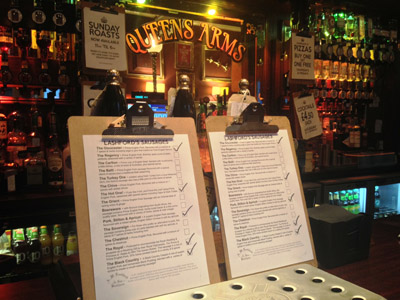 The Queens Arms in The Jewellery Quarter has teamed up with Flybe, Europe’s largest independent regional airline, as it sends sausages soaring into the sky to celebrate British Sausage Week and its new service from Birmingham International to Knock West International Airport in Ireland.

The ‘Great Sausage Swap’ will see speciality sausages being flown between the two countries, supplied by the best artisan butchers on either side of the Irish Sea.

Birmingham’s own award-winning premier sausage maker A.W.Lashford has supplied The Queens Arms on Newhall Street in the city centre for many years, and The Queens is now renowned for its great selection of speciality sausages.

So when the opportunity to link up for this special occasion arose, Flybe arranged to bring over master butcher Sean Kelly of Kelly’s Butchers in County Mayo along with his speciality giant sausages, and bring him to The Queens Arms to sample the very best of what Birmingham has to offer. 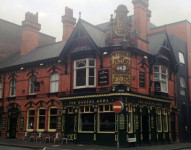 Christian Dixon, manager of the Queens Arms, commented, “We’re delighted to have been chosen by Flybe to host this special event. We are of course well known locally for our fabulous range of sausages, so it’s really fitting to be involved with the Great Sausage Swap. And it’s great for The Queens Arms to be chosen to represent Birmingham on the international stage.”

The Queens Arms has a constantly changing selection of speciality sausages supplied by A.W.Lashfords in addition to its regular menu.