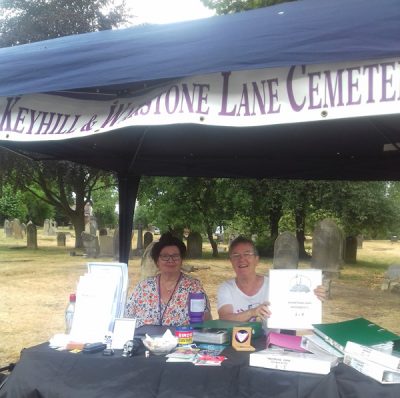 Jacqui Fielding manned the stall for assisting the public with queries about the location of their ancestors and loved-one’s graves. She said: “This can be an emotional time for some”. Once the section and plot number had been found, Margaret Beauchamp and Colin Giles located the actual resting place.

For the first time Helen Tubb manned the other stall that sold various books, novelty-bone shaped pens, Mexican Day of the Dead (All Souls Day) Key Rings and Bags. All to raise funds to restore the headstones in the Cemeteries.

Two Free Guided Tours
The ‘Friends’ gave two free guided Tours.
The first tour was conducted by Steve Roden in Warstone Lane Cemetery at 12 o’clock, the other by Richard Beardall in Key Hill Cemetery at 2pm. They had a good turn-out and the public gave generous donations back at the stall.

Gazebo Appeal
The ‘Friends’ are appealing for the loan, or donation, of a gazebo for Heritage Open day in Warstone Lane Cemetery, Saturday 15 September. They may also require some help in erecting it. Whilst they have one gazebo for their records, another gazebo is required for their sales table. Jacqui told us they do not wish to spend money on another gazebo, when the money could be put towards the restoration of another headstone, so if someone, or an organisation, is willing to lend or donate one they will be eternally grateful.

Kathleen Dayus Talk
Helen and Jacqui attended a talk about the life of author Kathleen Dayus at the Pig & Tail in Albion Street/Dayus Square
They enjoyed this short talk by Dennis Cluley and were able to inform him that Kathleen Dayus’ mother – Mary Ann Greenhill and sister Mary Ann White who were killed in an air raid on 10 April 1941 are buried in a private family grave in Warstone Lane – Section S, plot 852.
Also, at the talk was Kathleen’s granddaughter Jackie Wright.

A Positive Note
On a positive note ‘The Friends’ were busy and believe this was due to the event being advertised in the Hockley Flyer, Eventbrite, and the JQBIDS Festival Programme. ‘The Friends’ will be busy for the next few weeks chasing up enquiries.